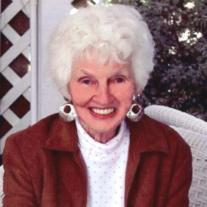 Helen McIlroy Tighe, Hobe Sound, FL, passed away peacefully in San Juan Capistrano, CA. Helen, eldest of the three McIlroy sisters, was born to Herbert and Madeline on October 14, 1917, in Bay Ridge, NY. She grew up in Baldwin, NY and graduated from the Roosevelt School of Nursing.

She began her nursing career as a Public Health Nurse in the Hell’s Kitchen section of New York City then joined the Army and was commissioned as a Second Lieutenant. It was during this time, at an officer’s dance at New York’s Ritz Carlton Hotel, where she met her soulmate, Second Lieutenant John J. Tighe. Married in February of 1942, they experienced the travels and adventures of an army family until retiring in 1962 from Fort Huachuca, Arizona.

Helen’s nursing career continued as a pediatric nurse until she retired in her early seventies as the Director of Nursing for a home health care agency. During this time she also volunteered as an advocate for senior citizen’s and their issues. Nursing was her profession but her family was her life.

Whether in a Quonset hut in Saipan, a duty station at the Pentagon, antiquing on Long Island, or raising five spirited children, she and her dear husband enjoyed 60 years of love, laughter and happiness. Her strength, spirit, faith and inimitable grace will be greatly missed by all.

A military burial with full honors was held for John and Helen at Florida National Cemetery in Bushnell, Florida.

In lieu of flowers donations may be made to St Jude Shrine, 512 W. Saratoga Street, Baltimore, Maryland 21201.