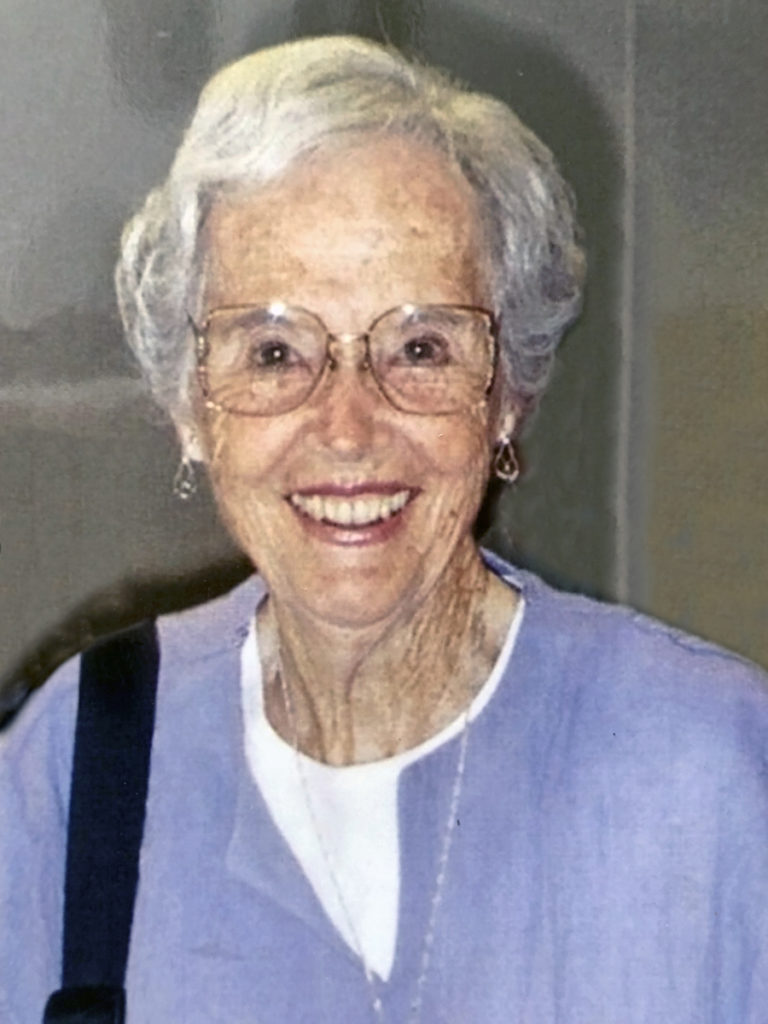 Helen Noble Farnsworth Swanson of Lake Forest, CA passed away peacefully on Saturday, January 26, 2019, following a courageous battle with Alzheimer’s. She was 91.

Helen was born to Thomas and Helen Farnsworth on August 12, 1927 in Birmingham, Alabama. Her family moved to Long Beach, CA in 1931 when she was 4 years old. She and her twin brother, Tom Farnsworth were born prematurely; Helen, the smaller baby, weighed only 3 lbs. She attended Lowell Grammar School and Wilson High School in Long Beach. She then went to Scripps College in Claremont for one year before transferring to UCLA, where she was a member of the Kappa Kappa Gamma Sorority. Even though she was a city girl, she loved spending her summers working at Camp O-Ongo, a youth summer camp in the San Bernardino Mountains.

Helen married Bernard (Barney) Swanson on April 24, 1948. They were married for nearly 65 years until Bernard’s passing in 2012. They had 3 children, Nancy, Bob and Diane. Due to Bernard’s work as a civil engineer in the oil industry they moved several times, from Long Beach to Coalinga (where they lived 4 years and 5 summers), to Van Nuys, Woodland Hills and Menlo Park, CA. At each location they became active in the local community church which led to developing many life-long friendships.

Helen was known for making her Christmas English Toffee which was eagerly anticipated each year by their friends and family. Some of her favorite pastimes were playing tennis, bridge and needle-pointing but she seemed most happy when she was volunteering to help others. She was active as a Girl Scout leader for 20 years when her daughters were young. She volunteered her time at Children’s Hospital in Los Angeles for several years. She always took time to help out elderly church members or neighbors who had a need. This was a heritage that she and Bernard passed down to each of their children.

In 1979 Helen accompanied Bernard on a business trip to England. While they were there they visited some old cemeteries and discovered the gravestones of some of Bernard’s ancestors. This began her passion and love for traveling and spending hours researching the family’s genealogy.

Helen not only gave generously of herself but in other ways, too. She delighted in slipping her children and young grandchildren a twenty dollar bill when they visited. As the children grew older, she further enriched their lives by taking them on various trips of a lifetime to Sweden, England, Scotland, Ireland, Hawaii, etc…

There was no better wife, mother, mother-in-law, grandmother, great-grandmother or friend than Helen Swanson. She was an amazing woman and will be missed by all who were blessed to have known her.

The Swanson family would like to express their deep appreciation for the loving care their mother received over the past 7 years at Lake Forest Country Home II and, also more recently, Sanctuary Hospice. They are all angels of mercy.

A memorial service celebrating her life will be held at 11:00 a.m. on Saturday, February 9 at the Irvine United Congregational Church, 4915 Alton Parkway, Irvine, CA 92604.

In lieu of flowers, donations may be made in Helen’s honor to the Alzheimer’s Association.