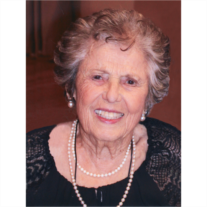 Helen Elizabeth Ellis White passed away on February 26, 2017 at the age of 93. For her last nine days, Helen was under hospice care in her home in Mission Viejo, after suffering a stroke. She was surrounded by her family members, who showered her with affection and words of love and appreciation, and who kept her comfortable, serene and peaceful.

Helen was born on August 13, 1923 in Great Falls, Montana, to William and Elizabeth Ellis. She graduated from Lincoln High School and worked as an executive secretary for the president of General Mills before she met her future husband, Harry L. White in 1944. Harry was stationed at Malmstrom Air Force Base near great falls during World War II. They were married on June 6, 1946, and lived in Montana, where Harry began his career with Western Airlines. While in Montana, two of her five sons were born, and she began fulfilling her life’s dream – being a great Mommy! In 1950, the family moved to Minnesota, where she gave birth to three more sons. The family moved to Southern California in 1956. She and her family lived in North Hollywood, Canoga Park and Westchester, until she and Harry moved to Mission Viejo in September of 2001, to be nearer to their children and grandchildren.

Helen fulfilled her God-given purpose in life by being a loving, devoted Mom. She was never happier than when she was surrounded by family, cooking meals for them and providing a happy haven of activity. She was known for making her homemade raviolis, a recipe passed down to her from Italian Mother’s grandmother. Helen was the consummate homemaker – she worked tirelessly to provide a loving environment of faith, happiness, structure and fun for her family. She took pride in having a beautiful home and cooking delicious food. She raised her boys at a time when hard-work and dedicated efforts to making life wonderful for her family were extremely valued. She also worked selling Avon products while her boys were in school. As a devout Catholic, she enjoyed volunteering for the church, singing in the church choir, and organizing many school activities. She served as a classy, gracious hostess in accompanying her husband’s career as the Vice-President of Western Airlines until his retirement in 1984.

Helen loved to dance and music always played an important role in her life. She and husband, Harry were favorite attendees at their retirement communities dances and at local jazz festivals. Helen loved to play the banjo and sing with her brother Rolly, both as a young girl and throughout her life when the extended family would rendezvous. Her friends and family members will remember her as finding her greatest joy in being a phenomenal, loving mother and grandmother. Loved ones will be comforted by remembering how joyfully Helen fulfilled her life’s purpose with gracious love and a fierce devotion to her family.

Helen is survived by her 100-year-old husband, Harry; her five sons, Rolly, Harry, Bill, Bob and Jim; her grandchildren, Taylor, Harrison, Alexandria, and Natalie; her great-grandchild Emmet; her brother Bill Ellis, and by many beloved nieces and nephews. She is preceded in death by her parents, Bill and Elizabeth Ellis, brother Rolly Ellis, and grandson, Trenton White.

The White family would like to thank numerous friends and family members for their help and support during these difficult days, and for their many beautiful expressions of condolences. A huge hug of thanks goes to the wonderful nurses and administrators of Heartland Hospice. The compassion, professionalism, and tenderness with which they treated Helen and her family was remarkable, and so very much appreciated. To the staff at O’Connor Mortuary, we thank you for treating Helen and our family with warmth, dignity and gracious compassion, as if we were beloved members of your own family.

Helen will be dearly missed by those of us who loved her so. Rest In Peace, dear Helen, in the company of your parents, your brother, your grandson and your daughter-in-law. Until we meet again…..

‘I can no longer see you with my eyes or touch you with my hands, but you will live in my heart…..forever.’