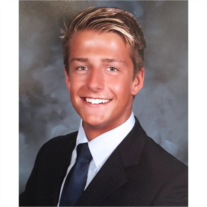 Hayden Charles Werner was born May 25, 1996, and passed away on May 20, 2016, just days short of his 20th birthday. Hayden grew up in San Juan Capistrano, CA, the youngest of four siblings who describe him as happy, bright, fun, entertaining, and always loving. While other kids may have tired of a tagalong little brother, Whitney, Forrest and Haley, were continually amused by his joy-filled approach to life, and were passionate about spending time with him. Hayden had a deep love for the ocean and actively boated, swam, and surfed.
Hayden was an accomplished pianist who studied music for many years. He approached playing the piano as he handled the other aspects of his life – self disciplined and happily persistent. He rose early every morning to practice, perfecting his skills by taking piano lessons for nine years. Whenever a piano was available at family gatherings, Hayden would quietly slip onto the piano bench and fill the room with beautiful music. Lest anyone would think he was a music nerd, he kept quiet about the fact that he took six years of violin lessons and mastered that instrument as well as the guitar.
The consummate California boy, Hayden attended the University of Santa Barbara, where he was a sophomore at the time of his death. Hayden saw no point in venturing out-of-state for college, when he already lived in paradise, with easy access to the ocean and the mountains of the High Sierras.
Hayden graduated from San Juan Hills High School in 2014, where he was a four-year Varsity starter for water polo and a member of the swim team. He was an excellent student, and received many academic awards, including being honored as a valedictorian upon graduation
Soon after arriving at UCSB, Hayden joined the UCSB Ski Team. He became an integral part of the 140-member team, and spent nearly every weekend of the season competing. His teammates recognized Hayden’s leadership skills, and elected him a team officer for next year.
Hayden was named 2015 Instructor of the Year by the Orange County Junior Lifeguard Program. He also worked as an Orange County Lifeguard. When he returned to UCSB in the fall, he set his sights on becoming a high school AP Biology teacher, making him a part of the fourth generation of his family to be educators. Those who know Hayden well have commented the he could always be counted on to shoot high. He wasn’t going to just be a teacher; he would be an AP Biology teacher!
Hayden was preceded in death by his older and beloved brother, Forrest, IV in March of 2015, and his grandfather Forrest, Jr. in September 2015. He is survived by his parents Forrest Werner, III, Tracy Werner, sisters Whitney and Haley, grandparents Jane Werner, and Pat and Frank Vranicar, in addition to a large extended family.
A paddle out in Hayden’s honor will take place May 30 at 6:30 p.m. at Strands Beach in Dana Point. A funeral Mass will be celebrated on May 31 at 11:00 a.m. at the Mission Basilica San Juan Capistrano. A reception will follow at the Laguna Cliffs Resort in Dana Point. All are welcome. The family asks that guests dress sharp, as Hayden always enjoyed looking fancy and wearing a colorful collared shirt.