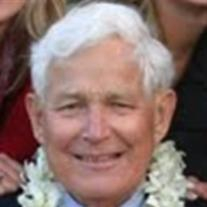 Age 87, died peacefully at home, surrounded by loved ones, on December 22, 2011 in Newport Beach, CA

Harry was born on May 26, 1924 in Burlington, Iowa to Harry Krieder and the former Anna Anderson. Harry and his three siblings enjoyed a wonderful childhood in Auburn, Indiana. After a stint serving his country as a United States Marine in World War II, Harry attended and graduated from Purdue University with a degree in electrical engineering. While at Purdue, “H” was a member of the Sigma Chi Fraternity. Upon graduation, he was hired by the heavy construction firm, United Engineers and Constructors, in Philadelphia, PA. Other than a brief interruption for a second tour of duty during the Korean conflict, Harry spent his entire 43-year career with this firm rising to the role of President of their Stearns-Roger division in Denver, Co.

On December 29, 1951, Harry married the love of his life, the former Catherine “Cassie” Cassells, and were partners in life for 60 years. “H” and “Cassie” lived in Philadelphia for 37 years where they raised three children, recently deceased son Stephen (Helen), and daughters Deborah (Mark) Hoppe and Sandra (Tom) Chaille. They settled in Southern California in 1990 and have enjoyed retirement ever since.

Being “Pop Pop” was Harry’s joy and he relished the endeavors and escapades of his many grandchildren and great-grandchildren. There was nothing “H” couldn’t fix, and he was always everyone’s first call when challenging homework, chemistry questions, or science fair projects might surface. Harry loved sports and discussing politics with those that shared those interests. Golf was a lifelong passion and he was a member at St. David’s Golf Club in Philadelphia, and later, Dove Canyon Country Club in Rancho Santa Margarita. Utilizing his extensive construction background, one of Harry’s proudest accomplishments was his 3-year involvement in overseeing the building and construction of San Francisco Solano Catholic Church.

Harry is survived by a loving wife, two siblings, two children, 10 grandchildren, and 5 great-grandchildren. Although Harry is gone and will be deeply missed, he will continue to live on through his family as well as all those who knew and loved him.

Services and burial will be held on Tuesday, January 3rd at 2:00pm at San Francisco Solano Catholic Church in Rancho Santa Margarita, CA, and Holy Sepulcher Cemetery in Orange, CA. In lieu of flowers or gifts, the family requests any contributions be made to: Birth Choice Health Clinics at 92 Argonaut, Suite 205, Aliso Viejo, CA 92656.