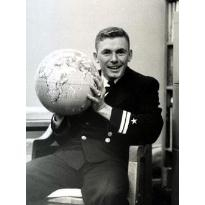 Gene was born on February 9, 1938, in Phoenix, Arizona and was the second of four children born to Harry and Mildred Morgan. He grew up in Phoenix and graduated from North Phoenix High School. He received an appointment to the United States Naval Academy, which he graduated from in 1959 as a member of the 19th company.

After graduation, Gene served aboard the USS Fechteler and in the ROTC unit at the University of Colorado at Boulder. While there, he met and married Rebecca Reiland of Santa Fe, New Mexico, with whom he recently celebrated his 45th wedding anniversary.

During his naval service, Gene was posted to a number of places including Northern California, Idaho, Connecticut, South Carolina, Virginia and finally, Hawaii. During this time, he and Becky became the proud parents of daughter, Kelly, and son, Mark. While in Hawaii, Gene served on several nuclear submarines including the Benjamin Franklin and Lafayette. His time in Hawaii also led to a lifelong love of surfing.

Gene retired from the Navy in 1970 at the rank of Lt. Commander. He and his family settled in El Toro, California, and he took a job with Southern California Edison as a nuclear engineer. While with Edison, he worked in the Steam Generation department as well as on all three units at the San Onofre Nuclear Generating Station. He would eventually rise to become Vice President and Site Manager at San Onofre and held that title until his retirement in 1993.

During his life, Gene had a passion for surfing, skiing, reading and music and played competitive beach volleyball for many years. Always health conscious, he ran or worked out nearly every day until suffering a stroke in November, 2008. His charismatic personality and wonderful wit brought joy to everyone. He was generous with his time, responsive to the needs of others, and dearly loved his family, friends and neighbors.

He leaves to cherish his memory and celebrate his life his devoted wife Rebecca Morgan; daughter Kelly Morgan and grandson Ryan Osborne; son and daughter-in-law Mark and Laura Morgan, grandson Casey Morgan and another grandson due in May; his sister, Carole Bunker, brothers, Phillip and Michael; many other family members and an array of lifelong friends.