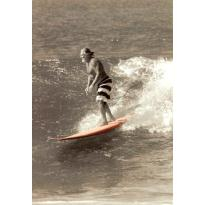 Hal Whitby, our ‘Pops’, passed on to new life on April 8, 2010 after an abundant, adventure and love-filled life and a most valiant battle against cancer.

Hal was born on October 18, 1948 to Joyce and Harold ‘Whit’ Whitby in Portland Oregon. He was raised with his half brother Jim and sister Barbara. At age 2, Hal’s parents moved their family to North Hollywood where Hal would first attend a Lutheran Private Elementary School and then public school. He attended junior high in West Covina before his parents moved the family once more to Laguna Beach. Hal attended Laguna Beach High School for two years and then after a final family move to Dana Point, Hal finished his junior and senior years at San Clemente High School. A varsity football player all 4 years, Hal graduated from SCHS in 1965.

Following graduation, Hal began working beside his father Whit and landed work in sound production for ABC, covering the campaign for upcoming Governor Pat Brown, Wide World of Sports, Joey Bishop Show, Chuck Barris Game Shows and others. By age 20 Hal had his own apartment in Manhattan Beach, was the proud owner of a Porsche and began his illustrious career as a free lance pioneer audio mixer. The musical events, television shows and films Hal masterfully worked on are numerous, too numerous to mention in entirety. In the early 1970’s Hal worked on video shows with Barbara Streisand, the Jackson 5, Chicago, the Beach Boys and Dick Clark.

In 1976 Hal entered the world of sound production by joining DGA. Hal was known for his sound production on films including Private Benjamin 1980 with Goldie Hawn, The Blue & The Grey 1982 with Stacy Keach, Uncommon Valor 1983 and Red Dawn 1984 with Patrick Swayze & National Lampoon s Vacation 1983 with Chevy Chase.

Hal worked on many TV series including Our House 1984-86 with Wilford Brimley. It was during these years he met Cary Amber Weitz who became not only his right hand man as Boom Operator, but a lifelong friend and family member as well. Additional TV series included Falcon Crest, Knotts Landing, Island Son 1989 with Richard Chamberlain, Thunder in Paradise 1995 with Hulk Hogan, and for 6 years and 99 episodes 1992-1998 Baywatch with David Hasselhoff and dear friend David Chokachi. Hal’s final work was with Martin Sheen in West Wing. His progressing cancer forced his early retirement in 2002.

The ensuing 8 years Hal was freed to do what he loved most: be with his family, friends, dogs Annie and Muggins, and the ocean.

Hal fell in love and married his sweetheart Suzy in 1970. Upon first meeting Suzy, he came home to tell his mother Joy, ‘I have met the woman I want to marry.’ They married later that year on his birthday, October 18th …the beginning of a 40-year love story apparent and inspiring to all who knew them. Hal loved and supported Suzy’s five children and the many family pets as if they were his own. He will forever be remembered and missed by Mary Phil Edwards, Nancy Thompson, Kasey Dimond, Dave Kristen Schultz and his ‘baby’ Sam Gary Marshall.

Decades of happy family memories in Hal and Suzy’s home ensued. Many friends became family and were invited to enjoy Hal’s hospitality and Suzy’s good cooking.

Hal poured his time, interest and hands-on-help into his 4 grandchildren and 5 great-grandchildren: Amy Colin McPhillips and their 4 children Kai, Dax, Ezra and Steele; Heidi Brandon Marshall and their 5 month old Gavin, Jacob and Alex ‘Lexi’ Schultz. What his children and grandchildren remember most was their Pops open pride often in toasts to them, his bear hugs, his ability to hear a need or want and to show up the next day with a gift, advice, offer of help.

Hal had a great love of music, Suzy’s cooking, the game of pool, art and particularly the ocean. A long time surfer and member of the Hawaiian Surf Club, Hal taught his sons-in-law, friends, grandson Jacob, and great grandsons the true love of surfing, the spirit of Ohana. The ocean, free and strong like him, will always bring Hal’s memory to his family.

Hal’s example of courage, selflessness, service, generosity, freedom and strength will always be remembered. He bore the pain of his cancer privately, refusing to stop life for a disease. Hal outlived every prognosis of his disease and was invited to speak to other oncologists and patients about his story. Hal lived and gave fully, communicating his love always.

Some of the comments coming from those who knew and loved Hal include:

‘If he told you something, offered his help, you could count on it.’

‘He had a kind word for everyone.’

‘For Hal, when the candle was flickering he made it burn brighter and brighter!’

‘I will never forget not only Hal’s courage, but intense love for everyone in his life.’

We invite all who knew and loved Hal and his family to join us for a celebration and honoring of his life on Sunday, April 25th, 3:00 pm at the Doheny State Beach with a paddle out to follow. Meet us at the Palapa on the sand directions at the gate and bring your beach chair or a towel. Hal would want you to feel the sand under your feet, the ocean breeze in your hair and to gaze at the wonder of the waves, free and strong, so like him. This ocean he loved was created by the God in whose presence he now stands, healthy and strong.

In lieu of flowers, please make donations to The American Cancer Society in Hal’s memory.