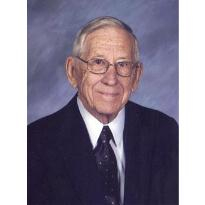 Harold Webster Brown, a resident of Laguna Woods , CA , passed away on February 22 after a 6-month illness from a stroke and Hodgkin’s Lymphoma. He was born in Glenmont, Maryland on May 2, 1921 to Webster Martin Brown and Ethel Mae Graeves Brown. Harold graduated from Bethesda-Chevy Chase High School in Maryland and worked in banking and real estate in the Washington D.C. area. He served in the U. S. Army Air Corps during World War II in North Africa, Sicily and Italy. After the war, he attended Benjamin Franklin now: American University in Washington D. C. and earned a Bachelors and Masters degree in accounting.

Harold met his wife, Evelyn Trickett in December, 1945 and they were married in May, 1946. In 1955, he joined the C. I. A. as an auditor in the Office of Finance. He and Evelyn raised two children in Silver Springs, MD and Buena Park, CA. Upon retiring, in 1981, Harold and Evelyn moved to Apple Valley, CA and also lived in Bridgeport, WV, before returning to California to be near their children and grandchildren. Harold loved to travel. He visited every state in the U.S., Canada, England, Italy, Israel and the South Pacific. His older grandchildren have many fond memories of traveling with papa and nanny in their large motor home. He was generous and kind and loved his family, his country, God and his church. His loving gentleness will be greatly missed. Harold is survived by his loving wife of 62 years, Evelyn; daughter, Sharon Lynn Burgess; son, Martin Lewis Brown and his wife, Jane Howland Emerson-Brown; and grandchildren, Melissa Denise Burgess, Casey Evan Burgess, Kyle Emerson-Brown and Blair Emerson-Brown. Burial will be at the Riverside National Cemetery on Friday, March 6, 2009.