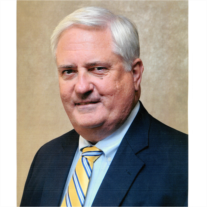 Rev. Harold Sam Schultz Jr. was born on May 4, 1947, in Lynwood, CA and passed away on March 7, 2015 due to complications of pneumonia. He graduated from Cal State Fullerton in 1969 with a BA in Accounting. He then earned a master of divinity degree from Eden Theological Seminary in 1972. He was ordained a minister in the United Church of Christ in June 1972.

Hal retired from PricewaterhouseCoopers LLP in 2007 after almost 39 years with the firm (Lybrand Ross Bros and Montgomery which became Coopers & Lybrand which became PricewaterhouseCoopers). He spent the majority of his career in the audit practice (industries served included financial services, petroleum, pharmaceuticals, retail, hospitality/casinos and public transit) and was the managing partner of the Orange County office for 10 years. He was a member of the Coopers & Lybrand Governing Council from 1988-94. From 1999-2007 he was heavily involved in state regulatory and legislative activities on behalf of PwC.

He is a past Chair of CalCPA and was a member of its
Government Relations Committee for 24 years. From 1988-2014 Hal attended virtually every meeting of the California Board of Accountancy as a CalCPA representative and testified before the Board on matters affecting the regulation of California CPAs. He chaired multiple CalCPA committees. Hal served on several task forces appointed by the Board of Accountancy to study regulatory issues. Mr. Schultz received CalCPA’s Distinguished Service Award and Public Service Award.

During his professional career Hal was also active with the AICPA serving on its Governing Council and its Uniform Accountancy Act Committee, Special Committee on State Regulation, Group of 100, and CPA Exam Content Oversight Task Force.

Rev. Schultz served as a volunteer minister at Mt. Hope Church in La Mirada upon graduation from Eden Seminary. He also filled in for ministers on vacation, loving the opportunity to write a great sermon. He served many other volunteer positions in the Southern California/Nevada Conference of the UCC (including 15 years as Treasurer), as well as the former Orange Association, and was moderator of two local churches. During his student years he served as volunteer chaplain at Lanterman State Hospital. More recently he served on the Board of the United Church Foundation as chair of the audit committee. Hal also served on the Board of Directors of the Retirement Housing Foundation from 2011 until his passing. This organization is dedicated to providing affordable housing to people in need all across the United States.

For many years he served on the Board of Directors of Orange County’s United Way, including service as Chair of Finance Committee and on the Campaign Cabinet for annual fundraising drive. California Elwyn (sheltered workshop for mentally challenged adults) tapped him for service on their Advisory Board for 4 years.

In the realm of education, Mr. Schultz participated in the Orange County Department of Education’s Principal for a Day and Superintendent for a Day in the Saddleback Valley Unified School District which he found very enlightening. During the founding years of Vital Link (program to help teachers and students understand the importance of basic work skills), he served as vice-chair. For 26 years he was a member of the Executive Council of the College of Business ad Economics at Cal State Fullerton, serving as President in 1996. He received the prestigious Vision and Visionary Distinguished Alumnus Award from Cal State Fullerton in 2000. He also received Distinguished Alumnus Awards from both the College of Business and Economics and the Department of Accounting. He was the outstanding graduating senior in accounting in June 1969, having passed the CPA exam before graduation.

In his spare time Hal enjoyed traveling, photography and cooking great meals for his family and friends. Pairing food with the wine from the family wine cellar became the springboard to his desire to create spectacular menus. After retirement from PwC, he could be found in the new outdoor kitchen watching food shows ( Alton Brown, Emeril, Giada, and Bobby Flay were favorites.) and preparing the evening’s culinary delight! Hal was fearless in the kitchen! Puff pastry, unusual ingredient, complex recipe- no problem! Always looking for a new tool or appliance for his next recipe! Many of his stunning travel photos (usually 11×14 that he printed himself) were shared at meetings he attended. Everyone waited to see what amazing photos he would bring.

He is survived by his loving family: his wife of nearly 45 years Melody ( neé Radinzel), his sons Charles (Robyn), Jason and his daughter Marcie (her fiancé, Michael Harper), and brother David (Dawn) nieces and nephews.

Memorial Donations can be made to South Coast Repertory (PO Box 2197 Costa Mesa 92628-2197) or Retirement Housing Foundation online at rhf.org.