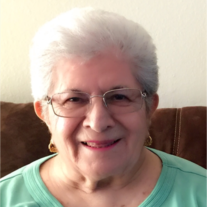 Born December 1, 1936, in Narayit, Mexico, she immigrated to the United States in 1949. She lived in and raised her family in Irvine, California. She was preceded in death by her brothers, Jose, Ignacio and Antonio, and is survived by her sister, Amanda. A loving wife, mother, grandmother and great-grandmother, the matriarch of a large extended family, she is survived by her husband, Gabino Zaldivar, and three sons, Gilbert (and Colleen), Victor (and Donna) and Michael (and Jaqueline). She was pre-deceased by one son, Ruben. Guillermina is also survived by 9 grandchildren and two great-grandchildren.

In 1958, at the young age of 20, Guillermina married Gabino and the couple were married 59 years. A wonderful cook (Mexican food her specialty) she was never more happy than when her house was full of loved ones. Christmas Eve was a family favorite, filled with laughter, traditional tamale assembling, biscocho eating and an occasional family round of tequila shots.

Visitation, Vigil and Rosary will be held at O’Connor Mortuary in Laguna Hills, CA on Friday, June 30, 2017 from 7 to 9 PM. Funeral mass will be held at St. John Neumann Catholic Church in Irvine, CA, beginning at 10 AM on Saturday, July 1, 2017, followed by internment at Good Shepherd Cemetery in Huntington Beach, CA. Reception to follow.