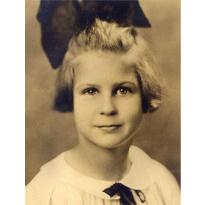 GRETCHEN HAUSCHILD FABIAN’s family and friends have lost a poet, musician, amateur painter, hostess, and a great blue-eyed lady always ready for laughter. On 3 January, 2008, she died at the age of ninety-two, fulfilling her desire to join her late husband Francis Gordon Fabian jr. ‘Bud’, who preceded her in 1999 after sixty-nine devoted years of marriage, in the beloved clifftop home they built at Monarch Bay, Dana Point CA.

Daughter of John and Leah Hauschild of Minneapolis’ Lake of the Isles, Gretchen attended Northrop School and Philadelphia’s Ogontz Military Academy, where she captained the winning drill team, a skill she expanded through later years leading people into merriment. At Smith College Parson’s Annex she joined the world’s only female chapter of the Ancient Order of Hibernians, quickening her literary creativity and gift for parody until graduation in 1937. Married the next year, she volunteered for air warden service near Tacoma, her husband’s naval post. After the War the couple moved to Lake Forest IL, and with friends formed the Monday Evening Quarterback Society, masquerading as hapless waiters at formal dinners or swarming the Palmer House in costume on roller skates. All her life a warm hostess at home, Gretchen charmed her surprised guests into marching with brooms, or standing behind their dinner seats in colored hats to sing their school fight songs all at once. Staid public spaces only waited for her to lighten them. She marched through streets behind the bagpipes at Aspen Winterskol, stood on Crystal Palace restaurant tables to sing the owners requested it annually and led friends and relations to her eightieth birthday dinner at the Ritz Carlton wearing false animal noses.

Gretchen regularly wrote poetry and practiced the piano, with Chopin her favorite. Partnered with her husband, she played golf courses around North America and the world, hitting a hole-in-one at Stockholm, and tournaments at El Niguel and Pauma Valley Country Clubs. At Lake Forest IL, Bradford PA, Dallas TX, Aspen CO and Monarch Bay, Gretchen decorated each house and garden beautifully-even touching up her hospital room-and held merry celebrations: the Other Ball for those somehow not invited to a President’s Inauguration and Derby Day for those sampling juleps around her television instead. When young cousins lately took her to the Monterey Aquarium she exclaimed before the giant octopus, ‘I’m really loving this! Tomorrow I won’t remember a bit of it, but right now I’m loving it!’

Her husband and family were always Gretchen’s life’s center, and they relished her unstinting love. She supported loyally her husband’s and children’s chosen work. She also volunteered at South Coast Hospital, hosted many benefit events, and continued a generous donor to the Episcopal Church and to Smith, for which she helped recruit students every year. On 3 January Gretchen left her son, the Rev’d Richard Fabian of San Francisco, her daughter and son-in-law Jennifer and Michael Isaac of Sonoita AZ, her golden retriever Lulu, and two longtime family friends and helpers who all gathered at her bedside. Her brother David died in 1988. Funeral services are planned for 11am Saturday, 16 February, at St Michael’s Episcopal Church, 3233 Pacific View Drive, Corona del Mar CA 92625. In place of flowers, please donate in her memory to South Coast Medical Center Hospital.