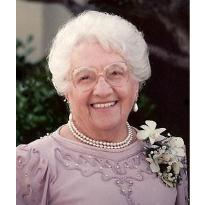 Marco, Grace M., passed away peacefully on August 8, 2009 at the age of 99 surrounded by her family. Born in Sicily, Italy on September 24, 1909, she came to the United States in 1917. She resided in Gary, Indiana where she met her husband and raised two sons. She moved to North Hills, California in 1962. Grace was happily married to her beloved husband, Philip for sixty years. Her life in California was filled with family and friends, especially her two sons, three grandchildren and three great-grandchildren.

Services will be held Tuesday, August 11 at 10:00 a.m. at Corpus Christi Catholic-Christian Church in Aliso Viejo, California and she will be interred at San Fernando Mission Cemetery in Mission Hills, California.

We love you so very much and know that you are finally together again with Papa in heaven.