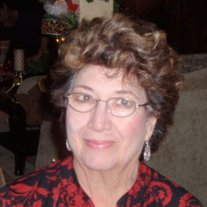 Gloria Palacios was born in Phoenix Arizona on November 27, 1938. Raised in Santana Sonora Mexico by her mother Rosario Martinez, she was an only child. She then moved to Capistrano Beach, California where she would live the rest of her life.

She was married for 33 years to Armando Palacios and had four children, Juan, Roy, Diana, and Monica. Gloria became the grandmother of 11 grandchildren, 7 great grandchildren, and an 8th great grandchild due in the spring of 2014. She devoted her life to her family and found joy in making everyone feel special and loved. Over the years she always made her home a welcoming place for extended family and friends.

Gloria belonged to The Church of God 7th Day for over 22 years. She was an active and devout member. She believed that Jesus was the son of God and that we would see each other again in His kingdom.