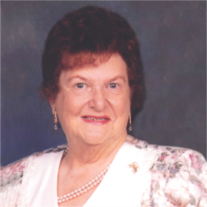 A very gracious, loving, caring woman with a big heart. Touched so many lives with her love and caring ways. She was one to always remember birthdays, anniversaries, graduations, births and many more occasions. You were guaranteed that you would receive a card, gift or special treat for your special day.

Gladys’ life began in a very small town called Tuckahoe in New Jersey. She worked at a telephone company in this small town of Cape May County.

Gladys was also known to have many military pen pals whom she wrote to, which brings us to how she met the love of her life and soul mate, Daniel. A cousin of Gladys actually was the one who had a hand with the start of this amazing relationship and your true classic fairytale love story. A cousin wrote a letter to her, but signed it Daniel Lavoie. The rest is history for an amazing 68 years.

She also not only raised 8 children, but she was a licensed day care provider and raised and loved many other children.

She went on to get her degree in child development/nursery school teaching. But her final love and accomplishment was working at Golden West College as a switchboard.PBX operator where she touched many many more lives. She retired after 35 years at the age of 85.

During her last couple years she had also developed a very close bond, love and friendship with a very special person and nurse who was more of a son to her, David Mendoza. It was a relationship that grew from sight, touch and emotions because a stroke left her without words.

In lieu of flowers, please make a donation to the Gladys Julia Lavoie Trust.