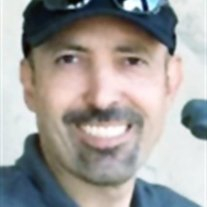 Gil Hurtado, 46, of Trabuco Canyon, CA, a beloved husband, father, son, and friend, passed away surrounded by his family and friends at UCI Medical Center. After a two-year courageous battle with Osteosarcoma, Gil lost his fight on December 19, 2013.

Gil was born on December 26th, 1966. He was born and raised in Santa Ana, CA, and graduated from Santa Ana High School in 1985. Soon after receiving a Mechanical Engineering degree from the University of California, Irvine, he married and began a fulfilling career in 1993. His few years at AST Research marked the beginning of his professional growth in IT. In 1995, he joined Rockwell International which lead him to Conextant Systems and then to Skyworks Solutions in 2002.

Gil was an avid lover of cycling and mountain biking. He loved living near Whiting Ranch, where he could jump on his bike and head out to the trails. He had numerous interests and passions. Some included the love for technology, computer programming and all types of ‘gadgets’. He marveled about the advancements in technology as he compared his first home PC as a teenager to his recently built home computer. Hie iPhone became an extension of him. Being able to look up locations on Google Earth and on apps such as Star Walks, made his other hobbies easier. Gil enjoyed traveling and had aspirations to see as many of the world wonders as possible. Although he did not see them all, he did travel to numerous countries including Japan, India, Malaysia and most recently Spain, Italy, Greece and Turkey. The Taj Mahal, the Vatican, and the Blue Mosque were among his favorite locations. Gil could always be found surrounded by his family and friends. He had that ‘something special’ which was obvious to those who met him. His calmness, serenity and courage with which he embraced life were evident in his beautiful smile.