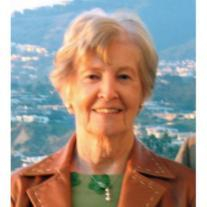 Gertrude (McCormick) Clark of Laguna Niguel, CA passed away on Sunday, November 25th at the age of 87. She is survived by her husband of over 65 years, Joseph; her daughter Lois Clark Curren (spouse of Christopher Curren) of Los Angeles, CA; and her son Michael Clark of Long Beach, CA.

Born and raised in Providence, RI, Gertrude was the daughter of the late Ronald V. McCormick and Laura McIntyre. She was sister to the late Kenneth, Milford, Frederick and James McCormick and the late Helen Houston, Evelyn Prigmore and Loretta Vranes. Her sister, Lois McCormick Wallberg of Salt Lake City, UT, survives her.

Gertrude attended St. Xavier Academy in Providence, RI and assisted Bishop Keough while working at the Cathedral of Sts. Peter and Paul, where she married her high school sweetheart and LaSalle Academy graduate, Joseph Clark. The family later moved to Akron, OH where Gertrude was an avid golfer at Fairlawn Country Club and then on to Southern California, where she remained active at Oakmont Country Club in Glendale. Gertrude and Joseph had been residents of Laguna Niguel and St. Killian parishioners for more than 35 years.

The funeral Mass will be celebrated at St. Killian Catholic Church at 11AM on Monday, December 3rd followed by the burial at Ascension Cemetery.