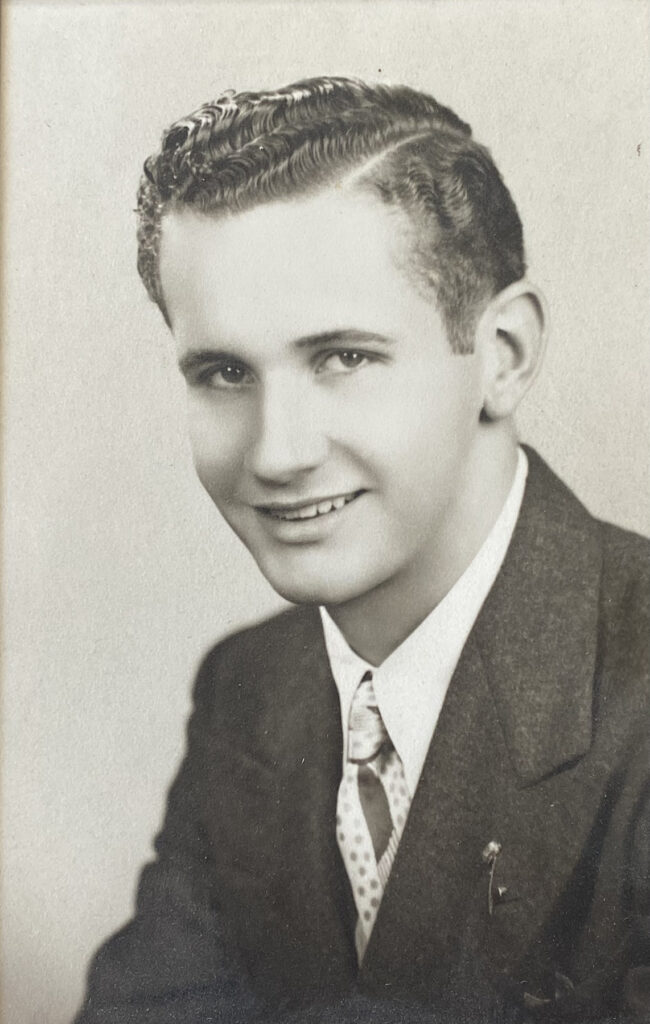 Gerald Henry Schumacher, better known as “Jerry,” “Uncle Jerry,” “Dad” and most fondly “Grandpa,” entered the gates of heaven on July 11, 2022.  Jerry was born on October 27, 1929, to Walter and Clara Schumacher, in Fullerton, California.

Grandpa was a second-generation Orange Countian, and proud of it.  As he would often point out, his grandfather Oliver was the first Constable of Orange County. Grandpa grew up on Melrose Avenue in Placentia, California, where he lived with his Mom and Dad and beloved sister Caroline. He attended St. Mary’s Catholic School in Fullerton, Valencia High School in Placentia – where he played every men’s sport offered – Fullerton Junior College, and he completed his education at Cal Poly San Luis Obispo where he earned his degree in Mechanical Engineering.

Grandpa joined his father Walter in the automotive repair industry, and together they owned and operated Schumacher’s Automotive, where Grandpa worked until he retired.

Grandpa was a true Renaissance man.  He was soft-spoken, but very social.  He was humble, but proud of his family’s accomplishments.  He was an artist and an engineer.  He was an inventor and a creator.   He was an athlete and a scholar.

Grandpa was a devout Catholic.  He joined the Catholic Alumni Club in 1957 where he met the love of his life, his beautiful wife of 63 years, Joyce Sweeney.  Jerry and Joyce were married at St. Boniface Catholic Church on August 2nd, 1958. Their wedding is fondly remembered by Joyce’s many nieces and nephews.  “Uncle Jerry” was an instant hit in the large Sweeney family.

Jerry and Joyce bought a home in Placentia in 1959, where they lived for 48 years.  There they raised their 3 children, Mary Clare, Carol and Jerry.  The family attended St. Joseph Catholic Church, where Jerry served the church as a Eucharistic Minister.  Both Jerry and Joyce were very involved in the Church Community. Their small family grew, and Jerry and Joyce were blessed to become grandparents to nine grandchildren and now one great grandchild. Upon retirement, Grandpa and Grandma enjoyed traveling with family and friends.

In 2007, Grandpa and Grandma moved to San Clemente to be closer to their children and grandchildren who all live in South Orange County.   They settled into their new community and became active in all things family.  Grandpa was well-known at all of his grandchildren’s scholastic and sporting events; he was a number one fan!  Grandpa was a great neighbor, and was well-known and loved at his new parish, Our Lady of Fatima Catholic Church.

Grandpa had a zest for life.  He had a heart of gold, a silly personality, and superior intellect.  He was devoted to his wife “Joycie.” He was passionate about his beautiful garden, the art of painting and photography, the creativity of wood working, and the history of his family.  He appreciated the simple pleasures of daily life.  He loved his “beach house,” to entertain, classic cars, a good beer, barbecuing on the Weber, “watching the boats come in,” his evening happy hours and spending time with his big family and friends. He was always ready to give you a tour of his latest project.  And he was always interested to hear about you.

Jerry’s, “Grandpa’s”, example of grace, hard work, faith, thoughtfulness and love – throughout all the seasons of his life – will always be remembered and will live on through his family.

A private burial will be held at Ascension Cemetery in Lake Forest, California, on Wednesday, July 20, 2022.  A Celebration of Life is planned for September 10, 2022.