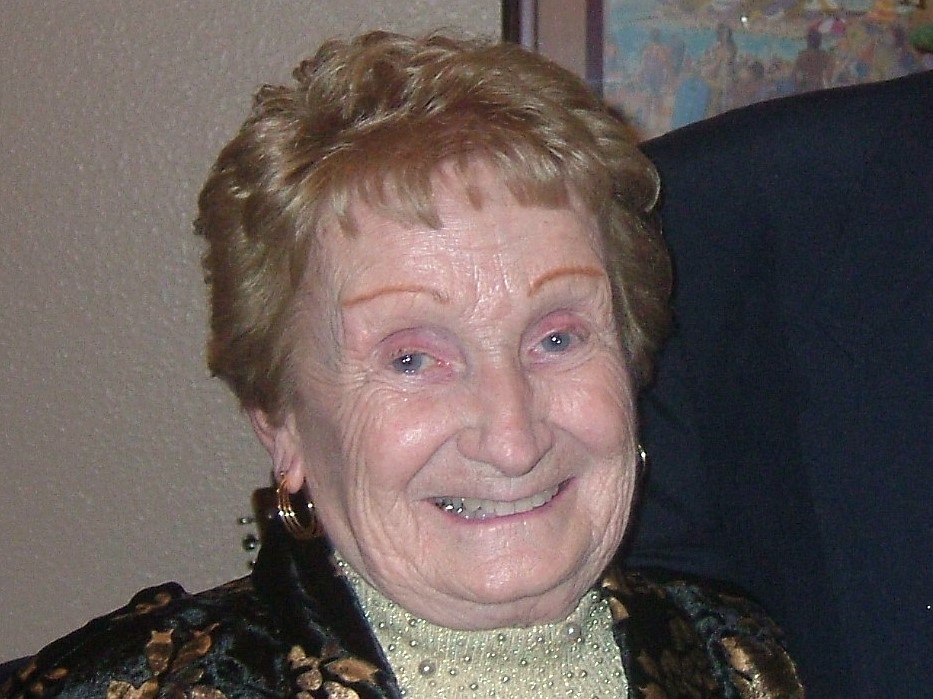 Born in Detroit Michigan, to L.J. & Lena Carey, Jeri was one of six children. She was raised in a loving family and enjoyed school, sports, singing, and friends. After receiving her degree in Nursing from Providence Hospital,Detroit, she went on to serve in the US Public Health Service during the 1940s. Her service area was urban Detroit where she primarily acted as a midwife.

She met the love of her life, Dick Collins, at the University of Detroit and they married in 1951. After graduating from college, Dick accepted a fabulous new job opportunity in Southern California. The couple began their marriage traveling across the country to start a new life on the west coast. Dick and Jeri embraced family life, raising four boys and one girl, first in Westchester and then in Mission Viejo, where Jeri lived in the same house for the last 46 years. The Collins homes were always filled with laughter, singing, pranks, and prayer. They were a second home for dozens of neighbor children and relatives. Jeri and Dick continued their own adventurous start with family vacations, first taking their eldest son on a DC-7 propeller plane to visit relatives in Michigan, then taking all the kids on train trips to Michigan, car adventures throughout the west, house-boating on Lake Powell and snow skiing in Lake Tahoe. Later they traveled with friends to Hawaii, cruised through the Panama Canal and the Greek Isles, and traipsed through Europe, where they kissed the famous blarney stone.

In 2001, Dick and Jeri celebrated their 50th wedding anniversary surrounded by family in San Diego. Together, they were devout in their Catholic faith and were blessed with many wonderful friends and family.

After Dick died, Jeri lived independently for many years, dedicated to her family, her church, and community. Jeri volunteered with St. Kilian’s Peanut Butter and Jelly ministry, where every week she helped make over 1,000 sandwiches for the homeless. She attended daily Mass, delivered the Eucharist to the homebound, and drove parishioners to Mass who couldn’t otherwise get there. In all these endeavors she provided more than a service, she became a friend. Jeri was a fearsome card player and could be found at the bridge table 3-4 days a week as well as playing Gin Rummy or Hand and Foot with anyone who would sit down at the table.

On Monday, July 23, 2018, at age 91, Jeri passed peacefully into the arms of our Lord, in her home, surrounded by her family. She will be remembered as an adoring wife, dedicated and loving Mother, and loyal friend.

She was preceded in death by her beloved husband of 57 years, Richard Edward Collins, who passed away in 2009 and her son Christopher John Collins, who passed away in 2015. She is survived by her sons, Patrick (& Dana), Richard (& Toni), Michael (& Jean), daughter Janet Cann (& Bruce), nine grandchildren, six great grandchildren, two sisters, numerous nieces and nephews, and many cherished friends.

To our dear friends and family:

Thank you for your kindness, love and support in our lives.

You were a treasure to our mother, and you are to us!