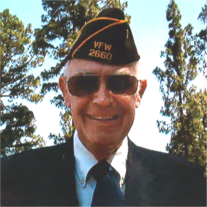 Gerald Albert Sampson, 89, of Laguna Niguel, CA, passed away on August 6, 2016 at his home, surrounded by family.

Born in Los Angeles at the Queen of Angels Hospital to Albert Edward and Angela Helen Sampson, Gerald Sampson was the eldest of 5 children. He is preceded in death by his siblings Eddie, Donna, & Helen, survived by his youngest brother, Bill.

A World War II veteran, Private 1st Class, G. A. Sampson retired from the Army and went on to receive a degree in chemistry from San Jose State. Following college, Jerry found work with the Santa Fe Railroad Co. working in the oil industry.

Jerry was quite fond of “a bargain.” He spent a great deal of his time shopping, mostly for the Christmas grab bag, which made for the most cherished holiday memories. When he was not busy playing Santa, Jerry enjoyed golfing and a good game of bridge. He was also fond of researching our ancestry and tracked the Sampson line all the way back to the Mayflower – direct descendants of Deborah Sampson and Miles Standish.

He will be sorely missed.

Visitation will be from 12:00-1:00 pm at O’Connor Mortuary on Friday, August 12th. Funeral services for Jerry will be held at the Mortuary immediately following the visitation. Jerry will then be laid to rest at El Toro Memorial Park in Lake Forest, CA next to his beloved daughter. In lieu of flowers, memorial donations may be made to UCLA Jonsson Cancer Center Foundation, 8-950 Factor Building, Box 951780, Los Angeles, CA 90095-1780. Att: Sampson Castellano Endowment, Brain Cancer Research, In Memory of Gerald Sampson.