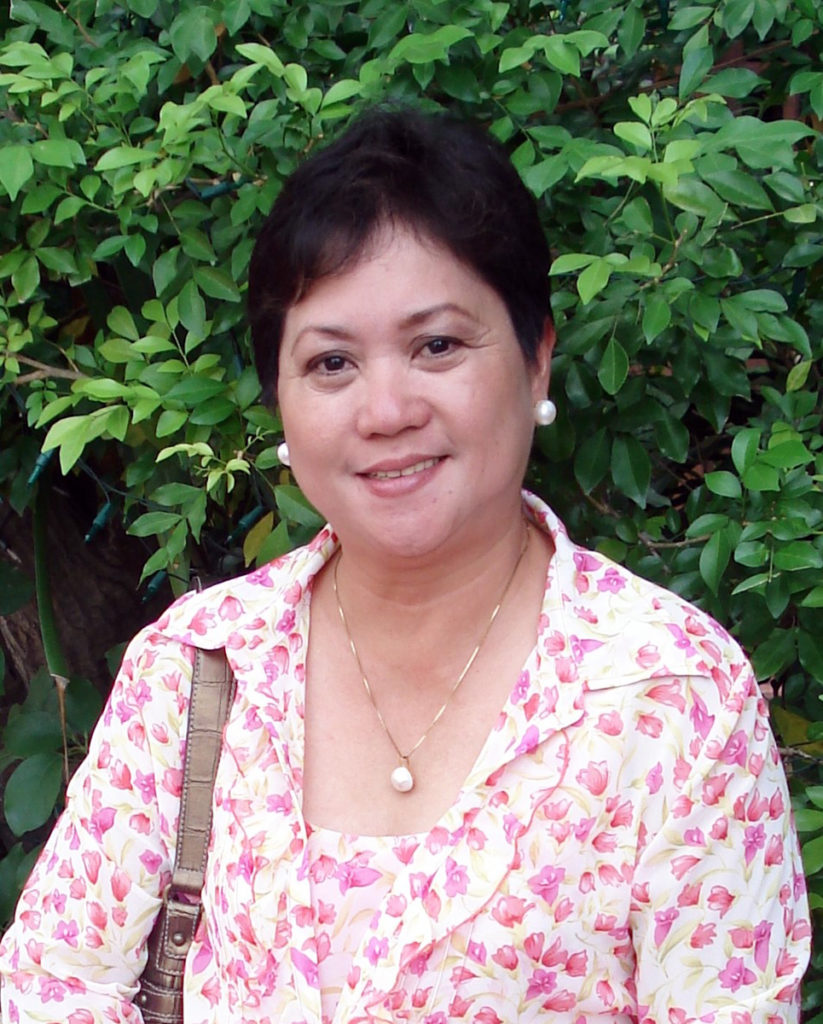 Georgina, or Gigi, as she was lovingly called by family and friends, passed away quite unexpectedly on Sunday, July 18, 2021 at the age of 66 in Irvine, California. She was the fourth child of Andreina Ortega-Arayata (RIP May 27, 2021) of Manila, Philippines and of Emmanuel Reyes Arayata (RIP May 22, 2018) of Tanza, Cavite, Philippines. She is survived by her husband, Ephraim Arca, and their only child, Reina Marie Arca (Charrie).

Gigi was born February 28, 1955, and was raised in Manila, Philippines with her six siblings. She started schooling with the Franciscan Missionaries of Mary at Our Lady of Loreto College. For health reasons, she was transferred to St. Rita’s College where she finished her secondary education in 1973. Growing up, Gigi always got extra love and attention from the entire family because of her poor health due to severe asthma. Surgeries on her tonsils and adenoids helped her overcome her asthma in her teens.

Georgina followed in her mother’s footsteps in pursuing a bachelor’s degree in education majoring in Home Economics at Centro Escolar University in Manila. This further honed her already excellent cooking and homemaking skills.

At the urging of an aunt, Georgina moved to Tanza, Cavite to teach grade school at Felipe Calderon Elementary School where she could express her great love & affection for children. It is here in Tanza that she met Ephraim, whom she married in 1981. Gigi, Ephraim and their baby, Reina Marie, settled in Tanza where Gigi continued to teach until she retired in 2018.

When Reina Marie (Charrie) moved to Irvine, California, it was Gigi’s dream to join her and experience life in another culture. She also thought that California would be her launching pad to visit the rest of the Americas. So, in 2019 Gigi and Ephraim emigrated to California to be close to Charrie and her husband, John.

Gigi’s health issues continued to be of great concern to her family and foiled many of her travel plans. However, with the help of the American health system, those issues were closely monitored and managed. Thanks to the attentive medical treatment, incessant prayers, healthier diet, and some exercise, Gigi’s health improved and she managed to get weaned off dialysis.

An avid traveller, Gigi ventured to many places within the Philippines, and to many countries in Asia. She also travelled abroad to Canada, the US and even to visit Charrie when she was working in Dubai.

Gigi also possessed great rhythm and was known to start dancing at the sound of a good beat. Her love of dance was infectious. Once, while at a resort in Boracay, upon hearing a very catchy tune, she got up and started spontaneously dancing and got everyone around the pool to join in, turning a rather dull afternoon to such a fun one for everyone.

Gigi’s quirky character is one that made her a family stand-out. Her sarcastic sense of humour brought regular bouts of laughter and her well-timed use of memes won’t be soon forgotten.

Friends and co-workers knew they could count on Gigi’s generosity whenever there was a need. Gigi never let anyone who approached her leave empty-handed, be it for comfort, advice, or financial need. She also mentored and provided material help if needed, to some youngsters, encouraging them to study hard, work hard, and reach for their dreams. She quietly and unassumingly helped many a friend who were struggling with their businesses or just day-to-day living.

A very devout and prayerful Catholic, Gigi generously offered her time & talent to her beloved Holy Cross Parish in Tanza, Cavite where she was a lector for many, many years. She had an extraordinary strong devotion to St. Augustine of Hippo, the patron saint of the town.

Gigi was a loving and devoted sister to Yoli (Dante Singson), Emma Arayata, Cynthia (Bes Abesa), Ricardo (Marivin Tigno), Manuel Victor (Laurina Briones), Marissa (Albert Loresco). She showered much love on all her nieces and nephews and their children.

The many people whose lives Gigi touch will never forget her humility, generosity, kind-heartedness and her great love for life. Gigi is greatly missed but will forever be in our hearts.

Her cremated remains will be interred at Ascension Cemetery, Lake Forest California.