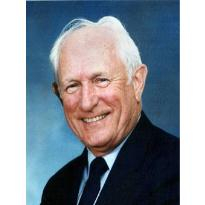 George Robert Jeffers, 84, was born April 14, 1925 in Brooklyn, NY and passed away on September 29, 2009 in Lake Forest, CA. He was a resident of Mission Viejo for the past 37 years and worked for J.C. Penney as a Construction Representative for 35 years. After his retirement, George was on the board of HCSC, which provides financial assistance for the J.C. Penney retirees in need. George cared deeply for his church, Santiago de Compostela Catholic Church, where he was an usher, and 4th Degree Member of the Knights of Columbus. He was a wonderful husband, father, grandfather and loyal friend. His outgoing personality won him many friends from all walks of life.

A Rosary in George’s name will be held on Sunday, October 4, 2009 at 4:00pm at O’Connor Mortuary, 25301 Alicia Pkwy, Laguna Hills. A Mass of Christian Burial will be celebrated Monday, October 5, 2009 at 10:00am at Santiago de Compostela Catholic Church, Lake Forest. Interment at Ascension Cemetery at a later date. In lieu of flowers, a donation can be made in George’s name to the Pulmonary Fibrosis Foundation 312 587-9272, www.pulmonaryfibrosis.org.