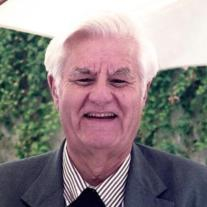 Age 81, died peacefully at home on December 28, 2011 in Lake Forest, CA.
George was born in Huntington, West Virginia on November 13, 1930, the eldest son to Ralph and Elizabeth Walker and grew up in West Virginia and Pittsburg, PA with his brother Bill and sister Mary Ann. He graduated from high school in South Gate, CA as outstanding student with numerous awards and was editor of his high school yearbook. He then went on to study at USC on a full scholarship where he was President of his fraternity, graduated Magna Cum Laude from the USC School of Engineering with a BS in Electrical Engineering and remained a lifelong Trojan football fan. George went to work with Westinghouse for twenty years as a Sales Engineer in the Aerospace Industry and then retired from Texas Instruments in 1993. After retirement he joined Power Devices with his friends.

On May 2, 1953 he married the love of his life and most devoted fan, Sharon Sawyer. They raised seven children: Carol, Valerie, Shirley, Georgia, Marilyn, Jim, and Bill in several towns in California, Maryland and returned to California and spent several decades in Mission Viejo, CA. George’s life was centered around his family and he loved being in the garden or in the kitchen making one of his famous soups. He was Little League baseball coach and Indian Guide leader for his sons. His children fondly remember the family vacations to the beach, mountains and cross-country adventures. Later in life he discovered snorkeling and scuba diving, which he learned with Sharon on one of their many trips to Bonaire.

George was known as “Pops” to his 9 grandchildren and 7 great-grandchildren and loved being the patriarch to his large extended Walker family. He was a beloved son, brother, husband, father, uncle, and grandfather. He will be greatly missed and fondly remembered by his family and friends while his spirit lives on in the many lives he touched.

Visitation will be on Thursday January 5th at O’Connor Mortuary in Laguna Hills. Funeral Mass will be at St. Kilian Catholic Church in Mission Viejo at 9 am on Friday January 6th with burial at El Toro Memorial Park in Lake Forest.