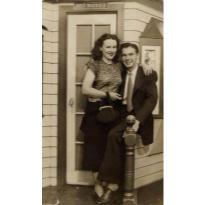 Blilie, George ?Penick? Yerkes, age 80, of Lake Forest, went to heaven on the wings of angels on Wednesday, August 8, 2007 with his beloved family at his side. He was born June 25, 1927 in Hatboro, PA. where he was raised and he graduated from Hatboro High School in 1945. He had many close childhood friends with whom he continued to keep in contact throughout his life.
He cherished his life-long friends from Hatboro and frequently told hilarious stories about the pranks that they pulled while growing up. At age 20, while working at Fischer and Porter in Warminster, PA, he met his future wife Claire, and from the time that they were married one year later, he never left her side. He moved from Hatboro in 1966 with Claire and his two children to begin a new life in California. And boy, did he! He traveled all over the U.S. as part of his job in the plumbing sales industry and he frequently loaded up the ?trailer? and took Claire and their two children on many of these business trips.

George not only had a long and prosperous career in the plumbing/sales industry, but he also thoroughly enjoyed the numerous friendships that he made in the industry. Many of these business associates also became life-long friends. He retired from Keyline Sales, Inc., a plumbing manufacturers’ representative company, as a founding member in 1988.

George is survived by his beloved wife of nearly 60 years, Claire M. Gibson Blilie; his son, James Blilie of Anaheim, and daughter, Jeannie Blilie-Nikelsky of Mission Viejo; one cherished granddaughter, Jayana DeWitt of Dana Point; and his sister, Martha Quirple of Hatboro to whom he was devoted.

Whatever George did, he did it with great zest and an energy that never ceased to amaze those around him. He had numerous interests and could talk about anything, from sports to politics and news events. George was known for his boundless and irreverent sense of humor as well as his many practical jokes. He was also known for his great story-telling that always kept his listeners laughing. George loved to travel across the country in the ?trailer? with Claire; he loved going to the race track with his friends, gambling in Vegas with Claire and their friends, playing golf with his ?PIGS? buddies and other pals, and watching Johnny Carson.

He was truly devoted to and deeply loved by his family. Once you became George’s friend, you were his friend for life. He will be missed tremendously by his family and friends. Arrangements will be made with O’Conner Mortuary/Laguna Hills Chapel. In lieu of flowers, please send donations to the Los Angeles Mission.