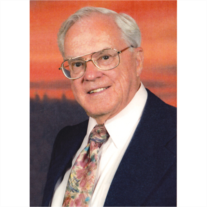 George was born on July 4, 1930 in Gebo, Wyoming to Gurtha Olin Rodda and George Rodda Sr. He spent his childhood years in Pasadena, California and attended Pasadena City College and then graduated from The University of Southern California with a Bachelor’s degree in Music. He proceeded to obtain a Master’s degree in Educational Psychology and a Juris Doctorate from Western State University.

During the Korean War George served as a Lieutenant in the United States Navy. He had a profound love for our country and for the American Flag and all it represents. He could not see the colors being presented or hear a patriotic song without shedding a tear. There was a very special place in his heart for this Nation.

George’s career as an attorney offered him many interesting opportunities to represent over 1,200 non-profit institutions and to be acknowledged as the leading authority on the history, application, administration and appeals relating to government land law. He participated in several “landmark decisions” and argued in front of the United States Supreme Court.

Because of his extensive background in the field of music, George worked for 19 years as the Minister of Music on staffs of various evangelical churches.

George Rodda worked tirelessly as an elected trustee in the Coast Community College District from 1969-1985. Throughout his tenure as a trustee, he held numerous elected positions and served as a member of various Boards and Committees. One of his highest achievements is that he was the most honored trustee in the 107-year history of the Junior and Community College movement in America and for which he received medals from Presidents Reagan and Bush for his services to the Nation.

A graveside service will be held at noon on Monday, May 9 at the Riverside National Cemetery.

In lieu of flowers please make a donation to the charity of your choice.