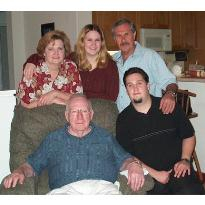 April 3, 2010, at 84, George Johnson passed away after losing a decade-old battle with dementia. For many years, in his own home, he has been under the direct care of his wife, his daughter, his son-in-law and a small professional dedicated and caring support team. His last days were spent surrounded by his entire family, in the comfort and familiarity of his own home; for that we are grateful.

Throughout his life, George provided inspiration to the entire family with his unwavering high standard for ethics, integrity, honesty and a sense of humor that bonded us together as a family.

Professionally, as an Electrical/Optical Engineer, his accomplishments are numerous; including the design and development of guidance gyroscopes for the Apollo space program, ballistic missile tracking and monitoring systems during the cold-war and stabilized targeting and laser range-finding optics and systems for Army battle tanks.

George is survived and remembered by his wife of 61 years, Shirley, his four children, George, Patricia, Michael and Thomas; his son- & daughters-in-law, Mehmet, Mary and Bonnie; his six grandchildren, Fuat, Jale, Emily, Nathan, Whitney and William.

His influence lives through all his family. He will be missed!