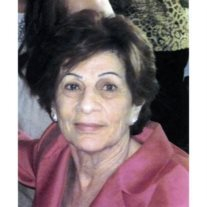 With deep sorrow, Yacoub Saba and his family are saddened to announce the passing of our beloved, Genevieve (Jenny) Ajlouni Saba.

After studying at Ramallah High School, at the young age of 18, Genevieve married Yacoub Aftim Saba in 1959 and immediately moved to Benghazi, Libya where she lived for almost 20 years, beautifully raising her 5 children: Iman, Ghassan, Maher, and the twins, Marwan and Rima. She moved with her family to Laguna Hills, California in 1978. Throughout her life, she was a testament of strength and dedication to her family. She was everyone’s mother, grandmother, aunt, sister, cousin, and friend. She was the center of the family and ran a tight ship. Nothing happened without her knowledge. She was the BOSS!

Jenny, as we all know her, was one of the first few women to drive in Benghazi in the early 1960’s. She drove her husband all around town, for his work, meeting famous and important people along the way. She loved to travel the world, having visited Russia, Ukraine, Palestine, Jordan, Lebanon, Greece, Germany, and the rest of Europe. She loved to stay at the Claridge Hotel in London, one of the fanciest hotels at the time and continues to be. She enjoyed telling us the stories about the hotel activities and who was staying there at the same time.

Jenny met wonderful and famous people during her life; in fact, she took a taxi ride with Shadia and Sabah, the famous actors and singers. She even had lunch with Um-Kalthoum and Abdel Halim Hafez!! Who gets to do something like that? She easily made so many friends from all over the world. Her presence was strong and embracing. She truly was loved by everyone. Her old time friends from over 40 years ago were sending well wishes and love notes to her.

Jenny was funny and the most animated story teller in the world. Her favorite was Little Red Riding Hood, but even the story Cinderella was special. She used to sit her young children, her nieces and nephews, and more recently her grandchildren, on the steps, enriching them with the imagination from her stories, recounting with so much fervor and passion. Over 35 years later, we all still remember the stories, and cherish them.

Jenny’s smile brightened the room, and her laugh was contagious, so real. She made us laugh every day, with her “P”s and “B”s confused all the time and her funny personality, so lively. When she laughed, her eyes lit up, and brightened her surroundings. Watching movies with her was the most dramatic! And if she had already seen the movie, she’d tell you what was going to happen before it happened. And when she didn’t like something, we knew especially with her famous hand gesture. She had a response for every comment, sometimes stern but mostly funny. And her big big hands..none of her kids wanted to be on the receiving end of her big big hands!!

And boy was Jenny the best cook! Her kitchen and the soulful food were the center of her home, feeding, and nourishing anyone that visited, always welcoming us with warmth and love. She was a woman in control, coordinating the daily lunch menu for the family business, Corona Motorsports, making sure her boys were well fed! And her children’s friends always stopped by just to see what Jenny was up to, what she was cooking, looking forward to taste the wonderful food. She truly was an amazing woman, in every way, as a wife, a mother, grandmother, sister, aunt and cousin.

And let’s not forget the tireless hours spent greeting customers at the store. Jenny was a force to reckon with. For over 20 years, even while she struggled with her illness, she went to work every day, enjoying seeing old customers and meeting new ones. She enjoyed interacting with all people. Jenny was involved in the Ramallah community, the Palestinian Women’s Association, and her church community.

And also survived by her sisters, Nellie and Jehana, her many nieces and nephews, and the many friends who love her dearly.

Her life ended too soon due to her struggle with cancer. She will be missed tremendously, and her void will be felt by all.

In lieu of flowers, the family is requesting that donations be made out to St. Mark’s Building Fund.