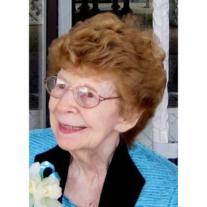 Grove, Geneva Mae “Gin” passed away peacefully at her home in Oceanside, CA on April 3, 2012. She was born in Apple Creek, Ohio, and grew up on a farm. Gin graduated from Smithville High in 1942, and immediately left for the big city of Cleveland. She attended nursing school there, and held a variety of jobs, including secretarial work as a civilian in the Army Air Corps during WWII. Gin married her high-school sweetheart, James Grove after the war. Several years later, they relocated to Southern California in search of jobs and sunshine. Gin was a 32-year resident of Orange, where she raised 3 daughters and worked as a secretary for the Orange Unified School District. She enjoyed reading, shopping, going to shows, walking with the Main Place Pacers, and attending the Orange Woman’s Club. Gin relocated to Oceanside for the last 16 years of her life, where she was active in the Newcomers Alumni Club and volunteered as a docent for the Oceanside Museum of Art. Although she and Jim divorced, they remained good friends until ill health separated them.