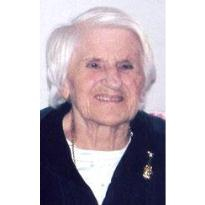 Zell graduated from high school in Rahway, NJ in 1932, where she was raised with her family. Zell later graduated as one of the first women to graduate from Trenton State College with a degree in Mathematics
in 1936. Zell married Hugh Ralph Naffziger on April 19, 1941 and they were married for over 65 years,
when Hugh died peacefully in his sleep on Wednesday, January 10, 2007 in Laguna Niguel, California.

Before moving to California in the 1980’s, Zell and Hugh resided in St. Joseph, Michigan for over 30 years.

They had nineteen grand children and eleven great-grandchildren.

Zell was preceded in death by her beloved son, Robert Naffziger and by her loving husband, Hugh Ralph Naffziger.

Zell was a strong, charismatic woman who loved family, friends and life. She was dearly loved by many and will be deeply missed by all.

A Funeral Mass will be held on Friday, January 26, 2007 at 10:00 am at St. Timothy Catholic Church in Laguna Niguel, California.

In lieu of flowers, the family requests donations may be made in Zell’s memory to the American Heart Association and Alzheimers Association as the charities.