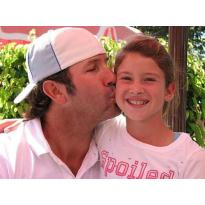 Gary Stephen Pifer, beloved son, brother and father, passed away at his home in Laguna Niguel on December 14, 2010. He was a Titan. The pillar of strength and courage to many that brought us tremendous joy and confidence. Gary had the strength of a Lion and a heart of a Shepard that he would use to give, provide and nurture with all of his heart. His life would seem too short to many, but those who were touched by him understood that the quality of existence far exceeds the quantity of time in which he lived.

Gary was born in Phoenix, Arizona on August 22, 1964. In 1968, Gary moved to California with his mother, Carol, and older brother, David, and to Lake Forest in 1971. Gary attended Aliso Elementary, Serrano Intermediate and graduated from El Toro High School in 1983. A gifted athlete, Gary attended Saddleback College and Santa Ana College before being drafted by the Detroit Tigers in 1985, living out his childhood dream from little league to professional ball.

He then started his own company, Pifer Construction, and has done amazing work on hundreds of homes in Southern California, Arizona and Nevada. In 1997, the greatest gift of all-his daughter, Courtney, was born. Gary was a wonderful, beloved father and centered his life around his daughter.

Gary is survived by his parents, Carol Pifer and Bernie Pifer, brothers, David, Jeff and Matthew Pifer, his daughter, Courtney, Aunt Mickey and Uncle Cliff May, Cousin Christina, the Reilly family as well as many extended cousins, aunts, uncles and friends.