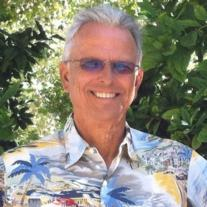 Gary C. Wennerberg, 66, of Mission Viejo, CA, beloved husband, father, brother, and Popi, passed away May 12, 2015 at his home with his family by his side. He fought a brave battle with liver cancer for 2 years and was awaiting a liver transplant at UCSD, but became too ill to receive one. He was born on January 7, 1949 in Pasadena, CA to John T. Wennerberg and Barbara Jean Conn.

Gary grew up in Covina, CA. He graduated from South Hills High School where he excelled in swimming. He served in the United States Marine Corps in Vietnam 1968 – 1971 as a jet aircraft mechanic in Chu Lai and Danang. Being a child of the 60’s, he wandered a bit, climbed many a tall tree while working for a tree service, but settled into a career with United Parcel Service where he made many friends and was affectionately known as the old man. He retired in 2003 after a battle with Non-Hodgkin’s Lymphoma. After beating Lymphoma, in his retirement, he worked at Arroyo Trabuco Golf Course. He enjoyed his family, grandchildren, playing his guitar, singing, writing, surfing, hiking and golf. He also enjoyed his solitude. He was a good friend of Bill W.

Gary is survived by his wife of 40 years, Merry; daughter Sarah (James); son Daniel (Marissa); grandchildren, Natalie, Gabriel, Ian and Dylan; 3 brothers and 1 sister; many nieces and nephews. A special thank you to his brother Joe and nephew and niece Morgan and Mika, who were with us for his end. He will be forever missed by everyone who knew him.

His celebration of life will be Saturday, May 23rd, at Mission Viejo Christian Church at 11:30 AM.

A special thank you to Dr. Tarek Hassanein and Dr. L. Stuart Nagasawa as well as Companion Hospice who were invaluable in their help.

In lieu of flowers, a donation may be made to the American Liver Foundation, www.liverfoundation.org.