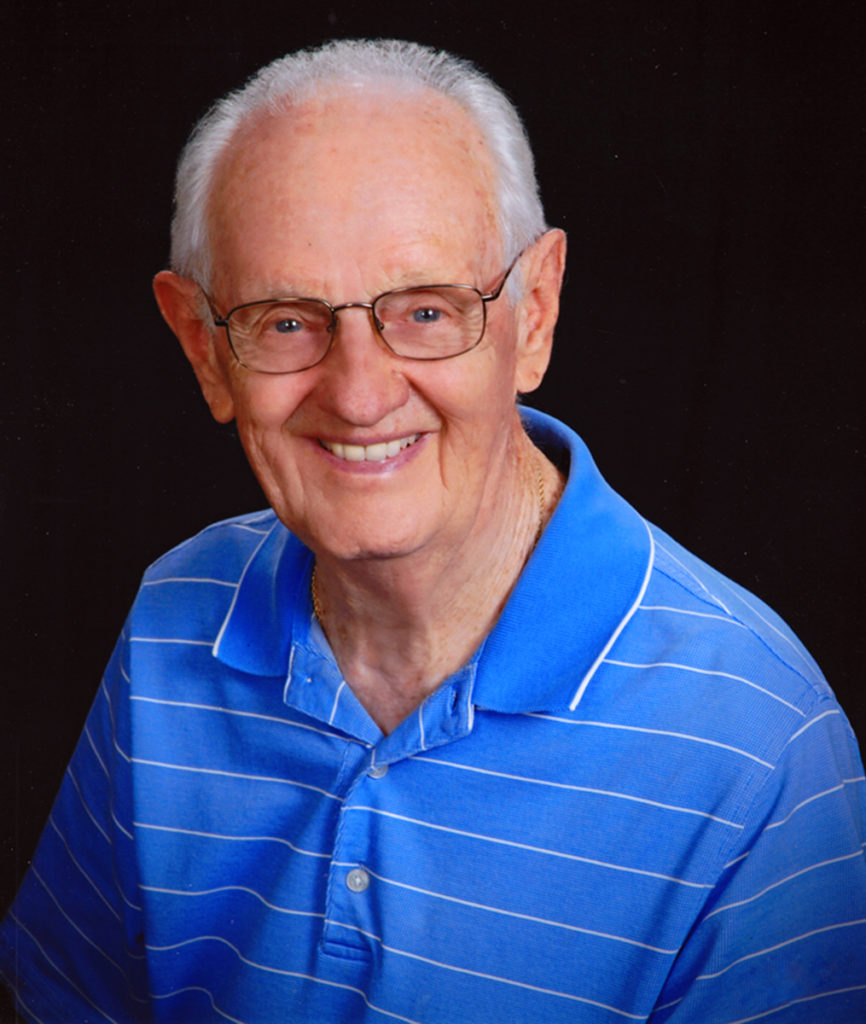 Gale P. Brick passed away on June 18, 2019 at 88 years of age. Gale was born in Fond Du Lac, Wisconsin on June 9th, 1931 to Peter Paul Brick and Magdelene (Wallace) Brick. Gale is the middle child of 5, including brother Warren, sister Patricia, brother Eugene, and brother Philip. Dad was close to all his brothers and his sister. He always made a point to call them on their birthdays.

Dad  attended St. Joseph Catholic Church and Elementary School. The Priest during that time was Father Riordan. Let’s just say that he ran a very tight ship. These were formative years for dad.  During dads elementary years he made many friends, including Tom Whealon, Tom O’brien, T.J. Scannell,  and Mike (Donny)  Moore. These would become very close school, and lifetime friends. T.J. Scannell became a priest, (Father Tony Scannell) and Father Tony married many of us kids. He is a dear lifetime friend of dad’s, and our family. Even though dad eventually moved away from Fond Du Lac, to California, dad remained friends with these special people.

Dad Graduated from St. Mary Springs Academy High School in 1949.  Dad excelled in sports. He was an all-american in basketball. He was a shooting guard.  He also played football and baseball. Dad has always been a hard worker. During high school, dad would work  in his dad’s bakery. He would go in to work after the Friday night football games. Sometimes his Uncle  Uddy, would let him take a nap on the bags of flour. He also worked early mornings in the bakery before school.

Dad’s older brother Warren, was a boy scout, and achieved the rank of Eagle Scout. Inspired by his brother, dad joined the boy scouts, and also reached the rank of Eagle Scout. Usually the mother of the scout pins it on her son at the Awards Night Ceremony. Dad’s mom had passed away when Dad was in high school, so Dad was honored to have his brother Warren to pin his award on him. Dad went on to become a Lifetime Eagle Scout Member.

After graduating high school, Dad and his buddies worked several different jobs for their first year out of high school. Dad worked in his dad’s bakery. Just before his graduation from high school dad had met Janet Koser at a school dance. She was one year behind dad in school. They dated that following summer.

The Korean war was starting to heat up. Dad and about 23 of his buddies decided to enlist in the Navy. Dad picked the Navy because his brother Warren had joined the Navy, and his dad was a Navy Veteran. Dad’s “buddy” going into boot camp was his good friend Mike Moore. They all went off to Boot Camp. While dad was away in boot camp, mom and dad talked about getting married. And sure enough after dad graduated from boot camp he had a 30 day leave. Mom and dad decided to get married, and that stared a wonderful 63 year marriage.  Dad married Janet Mae Koser on April 7th, 1952. Dad’s brother Warren, had started his career in baking and made the Wedding Cake.

After serving 4 years in the Navy as a cook and baker, dad received his honorable discharge. Dad was very proud to serve his country, and was a very patriotic man. He always proudly flew the American flag at his home. David helped dad put up the flagpole in our front yard in our Mission Viejo Home, and helped dad with many other projects around the house as well, because Dave was a skilled craftsman.  Dad loved his country. He liked to wear his Green Bay Packer hat, or His Navy Veteran hat. Like their Dad, Pete and Mike also served our Country. Steve stayed home and helped dad hold down the fort. (Well, Kind of Sort of anyway)

After returning home from the Navy, dad went to school to earn his restaurant and management degree. He opened 2 restaurants in Fond Du Lac, “Bricks Restaurants”. If the Milwaukee Braves won the World Series, it was free coffee. He owned and operated the restaurants for 8 years until 1964, when he decided to change careers. Dad went to work for Woodmen Accident and Life Insurance.

In the summer of 1964, dad and mom packed up the car with all 7 kids, and moved to Anaheim, California. After 3 years in Anaheim, in 1967 we moved to a brand new master planned community, called Mission Viejo. As the story goes, mom and dad drove across the bridge at La Paz Road, to go look at model homes, and mom took one look and said this is where we are going to move to. Mom Knew. They purchased a “La Paz” home, the San Lorenzo Model. It was located right across the street from Linda Vista Park. It was a 2 minute walk to Linda Vista Elementary School, a 5 minute walk to La Paz Junior High, and a 5 minute walk to Mission Viejo High School. After we moved to California, mom and dad had 2 more children. So we had 7 good old midwest children and 2 California kids, (Daniel, and Joey).  Mission Viejo would become our home for the next 45 terrific years.  Mom and Dad put 9 kids thru Mission Viejo High School. Like Dad, the youngest, Joey, was a star basketball player.

Dad proceeded to have a very successful and rewarding career in the Life and Health Insurance business. His career spanned 41 plus years. He was a people person. Dad was Friendly and Engaging. His client list was miles long. We’re not sure if he ever really retired.

When we moved to Mission Viejo, we attended St. Nicholas Catholic Church over in El Toro. Dad was a very active member of the Church. After a couple of years, dad was asked to be a founding member of St. Kilian Catholic Church in Mission Viejo. The church had not been built yet. The founding members met in homes, until the church was built. The church was a 5 minute walk from our home. Dad served St..Kilian Church in many capacities, and in many ministries from the beginning of the church  (1970) till about 2011. We think dad did about every job there was to do. He and mom were also eucharistic ministers.  Dad also served in many other ministries as well. Dad took a trip to Haiti with his good friend Connie Basso, and others, to help Father Mark with his school ministry. Dad had his own keys to the church, as he opened the church first thing every morning, and locked it at night. If fact we think he still has a set of keys on him. Dad loved the church and loved serving people thru the church. His love for the lord was never wavering and his faith was strong. And St. Kilian Church was a big part of dad’s life. He truly enjoyed his work there.  A lot of great friends and memories there.

Starting in 1996, us boys started to make a habit of attending one Packer game a season at Lambeau Field. We would go in December, the colder the better. Dad joined us and every year that we went we had new memories and new “Stories”. One year, just by sheer luck, Mike and Steve were selected to participate in a pre-game contest, on the field, 20 minutes before kick-off, in front of 70,000 fans. Dad got to see 2 of his kids actually on the Field. Some special memories with dad at the legendary frozen tundra of Lambeau Field. Dad loved those trips. And he liked hanging out with his sons, and nephews. And thanks to cousin Jeff, dad did not miss church on Saturday night. Dad used to have Packer season seats when we lived in Wisconsin, so this was special to him. He really enjoyed going. Every single year we would take the tour of the Stadium. One year we even met members of the Brett Farve family. And one year dad even made the front page of the Green Bay Press-Gazette.

Dad was married to mom for 63 awesome years. He raised 9 children. Do you know how much milk, bread, baloney, cereal, and peanut butter and jelly, we went thru?

On July 17th2017, Daniel got married to his bride Adelina. Dad was so happy for Daniel and so proud to see Daniel get married. It was a very special day. Adelina was a beautiful bride.

Some special memories that we have. Dad was a good cook and he could work the BBQ. He made his own sausage, seasoned them, and skinned and tied them. (These were called Brats) and he would then cook them on the BBQ grill. Goes great with beer. It’s called Beers, and Brats. It’s a Wisconsin, (Brick)  tradition.  Mike has taken over that role. And from his bakery days, dad would make chocolate eclairs. You can’t eat just one. Not a chance. And of course at Christmas, Dad would make Grasshoppers after dinner. It’s another family tradition.

Dad provided for us, set an example, made us a strong family, and leaves behind a legacy. It’s a pretty solid legacy.

The latest count is 9 children, Peter, (Sandy) Mike, (Teri) Steve, (Nancy) Kathy, (Brett) Susie, (Brian) David, (Allison) Nancy, (Hal) Daniel, (Adelina) Joey, (Jill) , 25 Grandchildren, 19 Great Grandchildren.  We are so very proud of our dad. We will miss him so much.  Dad was proud of his sons, and cherished his awesome daughters. As Joey said on Tuesday night of dads passing, “good job dad, you’re a good man”. Our Mom passed away November 29, 2013.

For the last several years, our dad resided at Freedom Village Assisted Living Facility in Lake Forest. Our Family would like to express our gratitude, and our appreciation to all of the people who work there and took such great care of our dad. We truly appreciate your kindness and your gentle care for our dad. You are special people. We know you will miss him, and his friendly smile and wave. We would also like to acknowledge Vitas Hospice Care. They were very helpful to dad and our family. 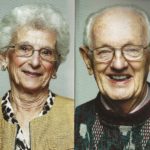 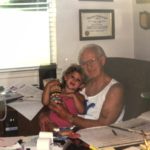