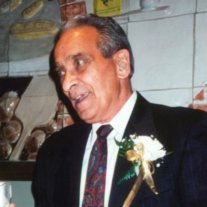 Shortly after his marriage to Anne Marie in 1952 Gabe was drafted into the U.S.Army and served in Korea. Returning home from Korea he went to work as a machinist for 10 years. In 1962 Gabriel & Anne Marie moved with their four children across country to Garden Grove, CA.

Gabriel then worked at North American Rockwell for several years and held 2 or 3 part time jobs to support his family. He then went to work for the Garden Grove Unified School District as a Maintenance Supervisor for over 20 years.

Gabe always had a smile for everybody, his blue eyes sparkled especially when his grandchildren were around.His younger days he enjoyed riding his motorcycle, bowling, and going camping with his family,

After retiring he volunteered for hospice, loved reading novels and doing puzzles in the newspaper. He enjoyed taking care of his tomato garden in his resort-like backyard.