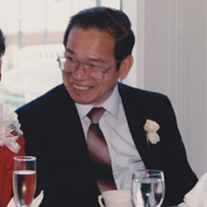 Fulvio “Bing” Gonzales passed away peacefully on Wednesday, April 27, 2016. He had fought back from bypass surgery in 1995, a debilitating coma in 2011, and the loss of his beloved wife, Celia Gonzales, that same year. Bing was born in Cavite, Philippines on April 18, 1934, the fifth of eight children. After high school, he enlisted in the United States Navy and began a long career that would take him away from his homeland to Japan and eventually to the United States. On December 8, 1962, he married Celia Arayata. They would go on to raise two daughters and spoil seven grandchildren with unconditional love and all-you-can-eat French fries. Bing was a loving father, grandfather, and husband. He is survived by his two daughters, Faith Booth and Fanny Gonzales-Sprouse; son-in-laws Steve Booth and Jeffrey Sprouse; grandchildren: Katrina, Christa, Hope, Scott, Joshua, Benjamin and Joseph. He is also survived by his siblings: Bienvenido; Salvador, Jr.; Ludivina; Rene; and Concepcion, plus many nieces and nephews. He is preceded in death by: his wife, Celia; brother, Hunfredo; and sister, Amelia.