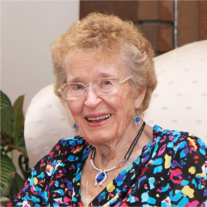 In the early morning hours of August 21, 2016 Frieda Martha (Quade) Birner passed away peacefully in her sleep.

Frieda’s accomplishments are wide and varied. She was a determined young woman, and in order to complete her education, she attended night school. She then began working for an optical company in Joplin, Missouri and was surprised to see her picture in a magazine from Kansas recognizing her accomplishments as the first woman to hold her position. Sometime later Frieda began working at Balliet’s in Oklahoma City. During this time Balliet’s owner realized Frieda had a flair for fashion and transitioned her to the runway as a model. It wasn’t long, however, before Charles stepped in to Frieda’s life.

Frieda married Rev. Charles R. Birner in Oklahoma City, Oklahoma on April 24, 1949. She served faithfully alongside her beloved husband for 67 years. Their ministry spanned many years beginning at St John’s, Hinton and Our Savior in Tulsa, OK. Continuing at Peace in Pico Rivera, and culminating at Abiding Savior in Lake Forest, CA.

In addition to raising her family, Frieda served her communities of faith through new member orientation, co-writing many Christmas plays and programs, and volunteering whenever needed.    She was welcoming, warm and kind to all. We will miss her sense of humor, especially her puns!  Always a ferocious scrabble player, she enjoyed word play, Quade family reunions, gardening and flowers, traveling, writing and recording stories for grandchildren, walking and picking up trash while finding coins (aka “Grandma’s Fun Fund”), family dinners, parties and gatherings, playing her harmonica, enticing us with her cinnamon rolls, and telling “Frieda Stories”.

Although she didn’t swim, in recent years she enjoyed socializing at water aerobics, entertaining family and friends, and browsing through her many photo albums celebrating her loving and growing family. And she never neglected her passion for fashion!!

The family requests that in lieu of flowers please consider making a donation in memory of Frieda Birner to Lutheran Bible Translators at this website: https://interland3.donorperfect.net/weblink/WebLink.aspx?name=E160112&id=31