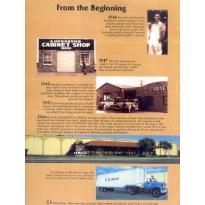 Frank T. Anderson was born in Los Angeles, Calif., to William and Anna Eck Anderson on what would eventually become a national holiday — Veteran’s Day, November 11, 1920.

After graduating from Bell High School in 1938, Frank attended Los Angeles Trade Tech, where he studied woodworking. He honed his skills at L.A. Period Furniture before enlisting in the Navy in 1942, during World War II. Over the course of his service, he married Betty Jo Reed in 1944. He was stationed at several southern California Naval bases, including Los Alamitos, San Diego, Long Beach and Great Lakes, Ill. He was also deployed to Salton Sea where he built floating wooden targets for Navy bomber planes. He was a valuable member of the Naval softball team and was honorably discharged in 1945.

After WWII, Frank started Anderson Cabinet Shop in 1946, in his parent’s one-car garage in Bell. Then, in 1947, he moved to a small shop in Lynwood. In 1953, he purchased three acres in Compton and built a 60, 000 square foot building under the name Anderson Cabinets. In 1966, the business moved to 13 acres in La Mirada, where he built the 125, 000 square foot XA Cabinet facility and employed more than 250 people. A satellite shop, Capital Cabinets, was built in North Las Vegas, in 1982, to service the entire southern Nevada and southwest U.S. housing market.

Frank retired in 1992, turning the businesses over to his seven children.

Frank is preceded in death by his wife, Betty Jo, who died in 1988; his parents and brothers William, Edward and Joseph.

Many will remember Frank’s active and full life which is marked by not only his successful businesses, charity and Catholic faith, but also by his commitment to his family. He was a lifetime member of the Knights of Columbus and a founding member of the Southern California Cabinet Manufacturers Association, where he served as board president.

The family requests that in lieu of flowers, please make a donation to your favorite charity in Frank’s name.