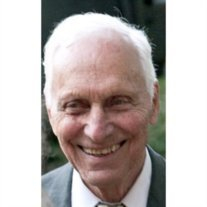 Frank Paul Frisco passed away peacefully surrounded by family on May 10, 2013. Born in Detroit on May 20,1921 he served in the Navy during WW2. After the war he met Alvera Mitchell, his beloved wife of 53 years. He graduated from Loyola University (now Loyola Marymount) in 1950. Always athletic, he played football for Loyola and continued his athletic career by teaching sports to the neighborhood kids and at St. Jerome’s School. Simply known as ‘Coach’ he is fondly remembered by many who knew him there.

He and Alvera lived in Westchester for nearly 30 years where they raised their 5 children and were active in their church (St. Jerome’s) and community. He was an exuberant figure who loved to dance and sing and will be remembered for being part of the Gaslight Theatre and his crazy antics as a Keystone cop.

He wore many hats in his career as an insurance broker, real estate broker, coach, and returned to CSULB in his 50’s where he completed a teaching credential and became a substitute teacher.

He lived in Mission Viejo for the last 35 years and continued his passion for athletics by playing tennis, swimming, water skiing, and dancing. He was a founding member of the Casta del Sol players (though he never followed his script-adlibbing was his specialty!) and was especially known for his work at St. Kilian’s Catholic Church where he attended daily Mass, was a lector, Eucharistic minister, and leader of many devotional groups.

Frank’s legacy is that of a pillar and strength of faith; a spiritual light that was visible in all he did. He lived by this and it extended into, church, community, charity, family and friends. Life held an exuberance of love for him that he shared with all he met. Frank will be remembered as a humble man known for his joy and for living his whole life with his heart and smile and faith.