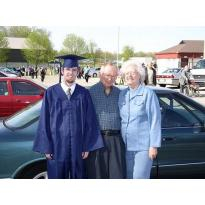 Frank Mayes was born on August 25, 1919 in Los Angeles, CA, the only child of John Frederick Mayes and Florence Hollister Mayes. He grew up in Huntington Park, graduated from Huntington Park High School and received his Bachelors Degree in Mechanical Engineering from Stanford University in 1941. He was employed by Douglas Aircraft Co. during WWII. He continued his work in aerospace engineering throughout his career with various employers. He played a role in the US space program during the 1960s as an engineer supporting the Apollo moon program. Frank designed wiring connections for the command module and worked on the redesign of the command module hatch following the Apollo 1 fire at Cape Kennedy in 1967. He also contributed to the space shuttle program before his retirement in 1979.

Frank met his future wife, Nadine, when they were both employed at North American Aviation in Downey. They were married in April, 1954 and celebrated their 56th wedding anniversary shortly before his death. They began their married life in Pico Rivera, CA and moved to Diamond Bar, CA in 1971. They have resided in Irvine, CA for the last six years. They have two sons, John of Troy, MI and Robert of Placentia, CA, and two grandsons, Stephen and Matthew, both residing in MI. Frank and Nadine were members of the Lutheran Church throughout their marriage. Frank was involved in his sons’ activities including service as a Boy Scout leader and leadership roles in the high school Band Boosters.

Frank enjoyed the outdoors, hiking and photography. He particularly enjoyed camping trips with his family throughout the West and was particularly fond of hiking in Yosemite. Frank and Nadine expanded their travels after his retirement to include cruises, overseas trips, many trips to Hawaii and annual attendance at Stanford football games.

Frank died on May 1, 2010 at his home in Irvine after a month long battle with pneumonia and related complications. Frank’s family requests that in lieu of flowers, donations may be made to the American Lung Association or the Braille Institute of America.