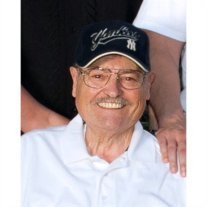 Buttacavoli grew up in Hudson County, NJ and was a graduate of Emerson High School, Class of ’52. He joined the United States Army, and was a Veteran of the Korean War. While serving, Buddy won a singing competition with his singing group, the Triangles, and appeared on the Ed Sullivan Show. In 1960 he founded the Union City Comets, a youth football team, and in 2006 he was presented with the Key to Union City for his dedication to the Al Blozis Junior Football League. He was also a Scout Master for Troop 12 in Union City.

In 1989 Buttacavoli relocated to Orange County, CA where he was an active member of VFW Post 5384 in Brea, CA and Post 6024 in Mission Viejo. He was also a member of the Knights of Columbus and the Italian Catholic Federation.

A Vigil/Rosary will be held at O’Connor Mortuary in Laguna Hills, CA from 7:00 to 9:00 PM on Sunday, December 8. A Funeral Mass at St. Thomas More Catholic Church will be held on Monday, December 9 at 9:00 AM with military honors and the presentation of the flag to follow.

In lieu of flowers, the family requests that memorial donations be made to any of the following organizations “In Memory of Frank Buttacavoli”: Veterans Association of America, American Diabetes Association, American Heart Association.