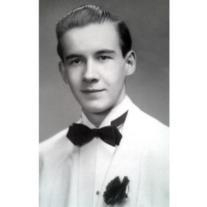 Frank Bold, 82, of Mission Viejo, CA passed away peacefully at home with family on December 28, 2014 after battling cancer. Born in Woodbury, NJ on October 28, 1932 to Mary and Francis V. Bold, Frank resided in Philadelphia, PA for his first 44 years. He was a graduate of Philadelphia’s Roman Catholic High School and St. Joseph’s University*. Frank was the oldest of five children and his life was filled with service and loyalty to family, country, Church, and community. After high school, he served as a Corporal in the U.S. Army as part of the Marshall Plan in post WWII Germany. Returning to “the Big P”, Frank served Philadelphians as a musician and U.S. postal carrier while in college. He met the love of his life Nancy (Bates) in 1955. Their courtship overcame a challenging cross-town commute, and they married in 1959. Shortly after graduation from St. Joseph’s, Frank started a 38-year career as a finance executive with the same organization, DBAs: Philco, Ford Motor, Ford Aerospace, Loral Aerospace, and Lockheed Martin, retiring in 1998. Along the way, Frank’s career advancement included relocations to Troy, MI in 1977 and Mission Viejo, CA in 1988. Frank and wife Nancy were long time parishioners and volunteers at Resurrection of Our Lord in Philadelphia, Holy Name in Birmingham, MI and St. Kilian in Mission Viejo. He was a church organist, volunteered for the Special Olympics, and was a former Grand Knight with the Knights of Columbus. His brother Knights recently honored Frank for his 60 years of active membership in the organization. His professional skills with music and numbers were matched with a great sense of humor and a knack for recounting captivating stories. Frank enjoyed golf, bowling, softball, and especially time with family and friends. Growing up a few blocks from Shibe Park/Connie Mack Stadium in Philadelphia, he was forever a true sports fan of the Phillies and Eagles.

Visitation is Friday January 9, 2015 from 4 to 6 PM at O’Connor Mortuary in Laguna Hills, CA. A Funeral Mass will be held Saturday January 10, 2015 at 11 AM at St. Kilian in Mission Viejo, CA followed by burial service at Ascension Cemetery in Lake Forest, CA. In lieu of flowers and to honor his best friend and brother Andrew Bold, the family requests that donations be sent to ALS Hope Foundation of Philadelphia P.O. Box 40777 Philadelphia, PA 19107, https://www.alshopefoundation.org/, or for Frank & Nancy’s unending battle to defend life, please donate to the www.sistersoflife.org Sisters of Life Annunciation 38 Montebello Rd. Suffern, NY 10901.

*”The Hawk will Never Die”