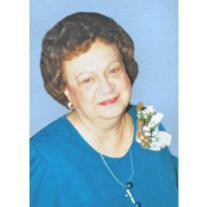 During her lifetime, Frances was a devoted wife, mother, entrepreneur, and homemaker. She grew up in a very large, close-knit Italian family. Her father, Otto B. Guli, was a shoe repairman, her mother Anna, tended to their family and helped out at their shoe repair store, and her younger brother Otto grew up to be her lifelong friend.

Frances served her country during World War II as a volunteer in the Red Cross, translating for the prisoners of war. She married Joseph G. Maltese, the love of her life, when he returned from serving in the war. For a brief time, she owned and shared her own little donut shop. Things changed two years later: she was blessed with twins, Joseph and Josette! She was a busy mom, and two years later son Richard was born.

In 1957, Frances moved with her family to Orange County, California. During this time, she led an active life, first as an owner of a little café, then working in real estate, but always a devoted mom and, eventually, a loving grandmother. Grandchildren Michael, Alicia, Christopher, and Anne Marie became the lights of her life, bringing her constant joy and happiness. She was so proud of all their accomplishments!

When Joseph retired, they moved to Henderson, Nevada. Their golden years were spent sharing good times with her brother and sister-in-law, her cousins, and always surrounded by many friends. Of course, many trips were made back and forth between California and Nevada so the family could stay connected.

After the loss of her husband in 2003, Frances returned to Irvine, California so she could spend more time with her children and grandchildren. Her family joy was increased by the addition of five great-grandchildren: Olivia, Ian, Dominic, Leah, and Flynn. Although distance may have separated some of her family, her love and devotion always kept them close in heart.

There are no words to express how much she will be missed by her family and her friends. Their only consolation will be the loving memories she left behind to warm their hearts and guide their lives until they can all be together again.

The entire family of Frances wishes to thank all of you who showed love, kindness, and concern for our mother and grandmother. Your sympathy and devotion is greatly appreciated. In lieu of flowers, if you wish, you may make a donation to St. Jude’s Children’s Research Hospital.