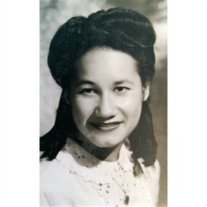 Frances Lopez, an El Toro native, was with several loving family members when she passed away in her home Wednesday, July 31. Born to Theodora and Fred Nieblas in 1928. She grew up on a ranch with her siblings Flora, Daniel and William (Jitter Bug). They all worked hard in the fields. Frances attended local schools and Tustin High School. She married Avelino “Lino” Lopez in 1948.

Frances is survived by her husband of 65 years, her son Daniel (Carol), daughter Irene (Sue), grandsons Martin (Terry) and Jason (Shannon), granddaughters Ari and Miaja, and four great-grandchildren. Frances is predeceased by her brother Daniel and son Ted.

Frances had requested no formal service. The family celebrated her life with dozens of family members, extended family and friends at the Lopez family home on Sunday, Aug. 4.

Affectionately known by many names – Fran, Pancha, Payte, Auntie, Auntie Frances, Grandma or Grammy, Buggah, Tia, Teet, Pork Chops and Applesauce – Frances Lopez was a generous woman who loved her grandchildren and great-grandchildren, as well as the many other children she helped look after and rear through the years. She was a mom and grandma to many. She comforted babies, and there wasn’t a one she couldn’t put to sleep if a nap was needed.

Frances loved music and dancing with Lino. She could be heard singing along with her favorite country western artists and with tunes from the 40s, 50s and 60s as she tackled her chores through the house. She was known as the “laundry queen” and would have everyone’s dirty clothes washed in no time. Family members joked that if you took a shower while staying at the Lopez house, Frances would snap up your towel to wash before you were done with it.

An excellent cook, Frances made the best enchiladas, chili beans, taquitos, and macaroni salad. She spent hours preparing meals for family gatherings, and anyone ever in need of a meal knew where to come. She not only cooked for the family; for more than 25 years, she cooked for 4,000+ students in the Saddleback School District, overseeing the kitchen after her own children were old enough to attend school.

Frances enjoyed eating out on occasion, eating shrimp and lobster at Sizzler or the restaurant she called “Teddy’s place” (Kings) in El Toro. She had several favorite foods. Mayonnaise was found in generous portions with her veggies and sandwiches. She loved black licorice and called dibs on black jelly beans at Easter time. Her daughter and granddaughter would often prepare Frances’ favorite cake, cherry chip walnut with sticky white frosting, for her birthday and other special occasions.

Red was her favorite color, and it showed in the clothes she wore, the bulbs hung every year on the family Christmas tree, and even with the baseball team she and Lino rooted for each summer, the Angels. Watching many a game on TV, Frances would often yell or utter “pendejo’ (stupid) or “metiche” (busy body/show-off) at the players in response to a play. And she had her favorite players, too, saying they made a mistake by getting rid of Torii Hunter, Bobby Abreu and Figgy (Chone Figgins).

Frances was cheerleader to Lino, her children and grandchildren throughout the years, attending ballgames and accompanying Lino when he bowled. She was a decent bowler herself; and in later years enjoyed Wii bowling with Lino, Irene, Sue, Dan, Carol and the grandkids, often outscoring everyone with her “straight” ball that many times trickled down the lane yet managed to score a strike.

Throughout their 65 years together, Frances and Lino were the dance-floor favorites. People often remark how the floor would clear at gatherings so that everyone could watch the Lopez couple dance. They could still outdance others even as they were into their 80s.

She and Lino had some lucky (and not-so-lucky) times at the casinos, and she liked watching her programs on TV (“As the World Turns” that they enjoyed on radio before TV, “The Young and The Restless,” “The Price is Right” and “Judge Judy,” to name a few).

She liked wearing her slippers around the house; but if she was going out, she’d put on her Naturalizers, a sweater and some jewelry. Her red lipstick was a must. We will remember her beautiful smile and adorable dimples.

Frances’ mind was sharp. On her last day with us, she would chime in with the names and places as Linda, Judy, Marguerite and Flora sorted through photos; and later, while watching/listening to the Angels game, telling Lino to be quiet when he was grumbling about an umpire’s call.

We were all fortunate to be touched by such an angel, whether we knew her for a long time or we just met her. We love you and we will miss you, Frances.