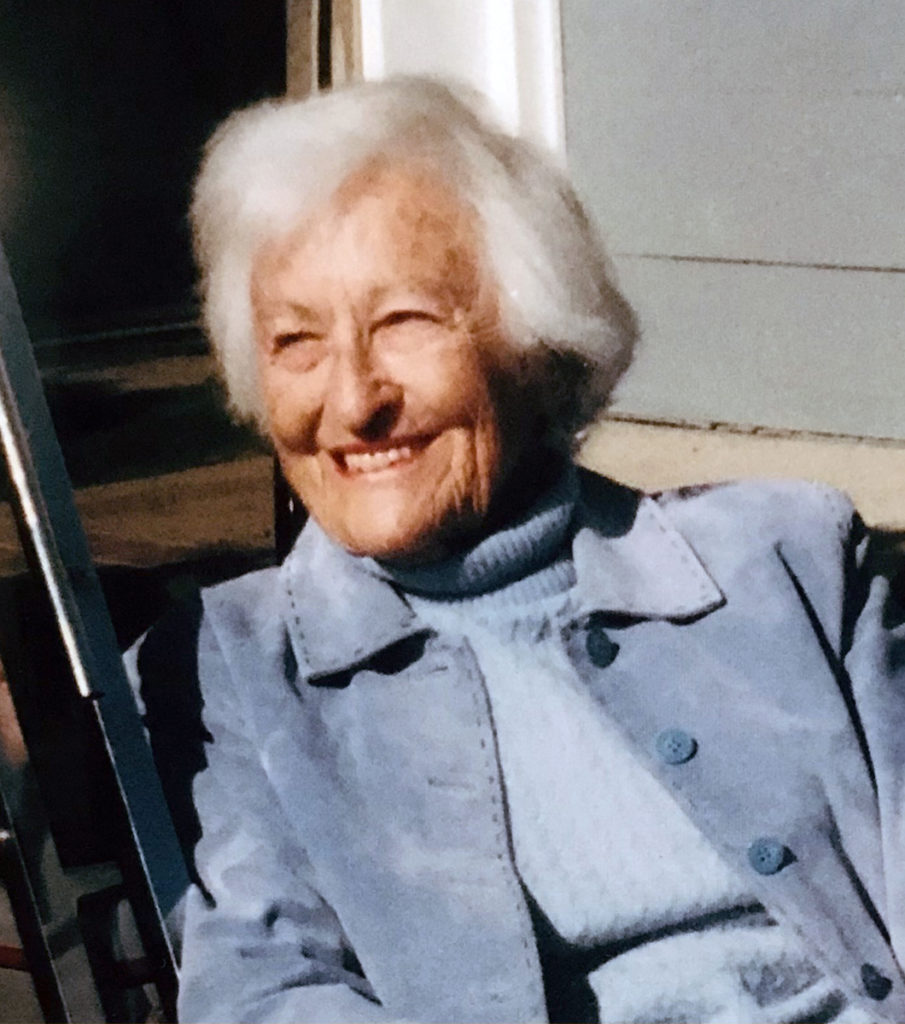 Frances Keyes Yeager passed away peacefully in her sleep on January 9, 2021 at the age of 98.  Her sparkling blue eyes, dimples unchanged since childhood and Yankee spirit will be celebrated by her six children and their spouses, 20 grandchildren and 27 great”‘grandchildren.

Born Frances Elisabeth Keyes in Winchester, MA on July 14, 1922, Frannie was raised with siblings Sam, Prep and Mary.  Despite recurring bouts of asthma, she led an active childhood sailing with her father and playing tennis and other sports.  After graduating from Winchester High School in 1940, Frannie went to work as a bank teller and began to date Louis Ernest Yeager, Jr.  She also continued her tennis career and competed in the 1941 US Open at Forest Hills in Ladies doubles.

Following Louis’ service in Europe in World War II as a decorated P”‘47 Thunderbolt pilot, they married in 1947 and started a family.  Sons Louis Ernest III (“Ley”), Clark Symmes, Frederic Keyes and Edward Kurt were all born between 1947 and 1953 as Frannie and Louis moved from Winchester to Duxbury, MA.  Then began a migration westward as Louis rose in the ranks with Shell Oil.  First, to Huntington, NY, then to Peoria, IL where son John Prescott (“Ziggy”) was born in 1958, to Milwaukee, WI where daughter Elisabeth (“Buckets”) was born in 1961 and finally to Highland, CA in 1963, where she would reside for 50 years.

Frannie’s asthma disappeared in California and the entire family had little problem adjusting to life in the West.  Family trips were spent camping along the California coast.  Frannie and Louis’ social life centered on their friends in the community and golf, tennis, swimming and playing bridge at Arrowhead Country Club.  Throughout her adult life, Frannie remained an accomplished tennis player and golfer. She never stopped striving for improvement as she continued taking lessons from the golf pro and searching for new clubs that would give her greater distance well into her 80’s.

Frannie was an avid reader but regretted not attending college.  In 1976, the same year her youngest son left home for college, she enrolled in San Bernardino Valley College and proudly earned her Associate Degree in 1980 at the age of 58.

In retirement, Frannie and Louis enjoyed trips to Europe, Hawaii, Mexico and back to the East Coast to see family and friends.  When home, Frannie now had grandchildren and their sporting events to watch.  She was always encouraging and took great joy in their accomplishments.

In her final years, Frannie lived comfortably in her own home in Laguna Woods, CA with her dog Tommy and near Clark and his wife Ingrid and daughter Buckets and her husband Mike Marks. She was visited there often and loved by all.  She is also survived by Ley and his wife Ofelia, Fred and his wife Denise, Kurt and his wife Barbara and John and his wife Evelyn.  Frannie’s life will be honored and her death memorialized with Louis at the Riverside National Cemetery.

Those wishing to pay by check should note “Frances Yeager” in the memo and make it payable to:
Making Hope Happen Foundation
777 N. F Street
San Bernardino, CA 92410