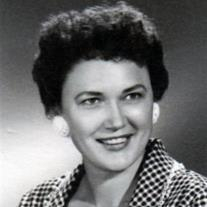 Florence Frances Recker Briley was born October 31, 1921 in the small town of Carlsbad, New Mexico and passed away December 19,2014

She was the baby of the family, five girls and one boy.

In 1938 she and her parents moved to Salem, Oregon. During the war and until 1944, she worked for the county extension service in Salem. In 1944 her father had to be in a dryer climate, so they moved back to Carlsbad, New Mexico where she worked for the Carlsbad Army Air Force Headquarters. She arrived in Santa Ana around 1945. When the war was over she worked at Pacific Bell as a secretary, drafting clerk and supervisor. She and Richard were married in 1956. They adopted two children, Karen and Keith, She retired in 1984 and moved to Costa Del Sol, where she was active in various clubs. Survived by: Karen and Keith. Two grandchildren, Jessica Rose Briley and Richard Dylan Briley and one great grandchild, Eyela Marie Briley. We rest knowing that Florence and Richard have been reunited.