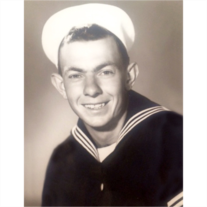 Fletcher Leonard “Woody” Woodruff passed away on May 18, 2016, at his home in Midway City, CA. He was 83 years old and been in declining health for the past several years.

He was born on June 21, 1932 in Griffin, GA, to Joseph Deedy Woodruff and Gertie Mary Hand Woodruff. Woody graduated from Spalding High School in 1949. He was a member of the Basketball and Baseball teams. He was also a member of the HI-Y club as well and the cheer squad. Life in a small town allowed for many such opportunities to “shine” in that way.

After graduation, he enlisted in the Navy, and served on the U.S.S. Sicilily during the Korean War.

The U.S. Navy brought Woody to California, where he met the beautiful JoAnn (Joan) Campagne. They were married March 25, 1955, in Griffin, and remained married until Joan’s death in September 2008. Two children were born to them, Daughter Robin and Son James, (Jimmy).

After his military service, Woody was a student at Southern Technical Institute, where he earned an associates degree in 1957.

Also in 1957, Woody and Joan left Georgia and moved to Southern California, first in Huntington Beach, near Joan’s family, and then in Midway City, where they both would live until their deaths.
Woody had two careers, the first at Beckman Instruments, from 1958 to 1986, where he worked as a material control manager. He was very close to his work family, and in the early years at Beckman, his home was often the location of poker parties with his Beckman Colleagues. In his later years at Beckman, he took a great interest in three young men who worked for him, Kevin, Greg, and Rick. These men came to be like 2nd, 3rd, and 4th sons to him, and their visits to him throughout the years, and especially at the end of his life were the sources of much joy to him.
In 1986 he was diagnosed with Laryngeal cancer, and also became a casualty of a corporate restructure at Beckman. This resulted in his 2nd career, as a Real Estate Agent. For nearly 20 years he specialized in helping his fellow Veterans become homeowners.

To say that Woody was a sports, horseracing and casino gambling enthusiast would be an understatement of epic proportions! He loved his Dodgers, Santa Anita, and of course, Las Vegas. Immensely and intensely… He was also a gym rat long before it was anything close to fashionable.

Woody was always unabashedly, unapologetically himself, writing the chapters of his life in the boldest ink one could ever imagine. Whether it was those swap- meet Christmas gifts , being smuggled into rock concerts by trashcan, or attempting to re-write every rule of hospice care to suit his desires, he was truly “Wunofakind Woody”.

He is survived by daughter, Robin, son Jimmy, son-in-law John Longfield, and granddaughters Sarah Longfield and Jennie Longfield. He is also survived by long time companion, Pamela Amelotte, who truly taught him to live in the aftermath of Joan’s death.

Special are extended to Woody’s two caregivers, Gerby and Mario. These last 10 months of Woody’s life could not have possibly been managed without their exceptional care.

Woody’s family is also extremely grateful to Compassus Hospice for their service– not only Woody, but to the entire family during the final 10 months of Woody’s life.

“Team Woody” was not just a phrase, but the mechanism that allowed him to experience a peaceful and dignified passing. With being in hospice for so long, it felt as though his family worked with and knew everyone there. This could not have really been the case, but some of the members of “Team Woody” who were of greatest assistance were of his nurses Holly, Anabelle and Angelique, as well as those who came to his aid at all hours of the night, Daymi, David, and Sandy. Special thanks also to Denise and Melinda, and everyone who took our many, many phone calls. Also to his original nurse, Rosa, who was only with him for a short time but was a tremendous help in assisting the family with the initial adjustment from “cure care” to “comfort care”.

Memorial Donations to Compassus, in Woody’s name, would be greatly appreciated. Donations can be sent to : Compassus, Orange County, 377 E Chapman Avenue, Suite 280, Placentia, CA 92870, with “Woody Woodruff” added in the memo section of the check.

In keeping with Woody’s extremely casual style of dress, the family respectfully requests no formal or “dress up” attire at his services.