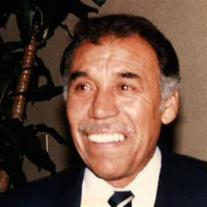 Fernando Conrad Gasporra was born on July 18, 1931 in Huntington Park, CA to Mauricio and Refugio Gasporra and left this world on Friday, October 5, 2012. He was the 2nd of 6 brothers and an older sister, Ruth. All siblings attended Huntington Park High School. The Gasporra family left their mark, excelling in athletics and student government. Fernando was a football and track star and competed in both sprints and cross country. In his junior year he placed 3rd in the 1320 event and his brother, Baltazar, placed 2nd in the mile at the Los Angeles City Track Finals. That year the finals were held in conjunction with the Coliseum Relays which consisted of top collegiate and Olympic athletes. There were 80,000 people in attendance that night. The following year Fernando placed 4th in the mile at the finals . He was an officer for The Boys forum, selected as representative to Boys State in Sacramento, and was a YMCA councilor for Camp Fox on Catalina Island. His senior year he was selected as the Outstanding Student and Outstanding Athlete for his graduating class.

Upon high school graduation Fernando attended East Los Angeles Jr. College where he continued his football and track careers and received a scholarship to San Jose State College. His time was cut short there, becoming home sick after one year and then attended San Diego State University. After a nasty knee injury while playing football he returned home and then joined the United States Marine Corps. In the Corps he served as a Drill Instructor and attended Platoon Leader Course training at Quantico, VA. During his service he witnessed the atomic bomb testing in Nevada.

In 1957 he married the love of his life, Maria ‘Mary’ Soriano, and they made their home in Anaheim, CA where they had 4 children, Christine, Theresa, Jon and Mia. They then moved to Lake Forest, formerly, El Toro, CA and he became the Senior Sales Representative for the 12 western states for Teledyne Laars Corp.

He enjoyed his off time playing tennis and following his beloved USC Trojans football team. He spent his weekends cooking BBQ for his family. He was also heavily involved with the Men’s Club of the Lake Forest Beach and Tennis Club, where he served as President. In his retirement years he enjoyed having his great-grandchildren over to go swimming and catching up on his grandchildren’s military careers.

Fernando was preceded in death by his parents Mauricio & Refugio, his wife Mary, his brother Baltazar, and nephew Thomas.

He leaves behind Chris Finney and Mia Reed of Lake Forest, CA, Teri and Christopher Manazir of Cedar Park, TX and Jon and Nancy Gatwood Gasporra of San Jose, CA.

He is also mourned by his brothers, sister, many nieces and nephews, and all his friends in the Lake Forest community.

We will miss you Fernan.