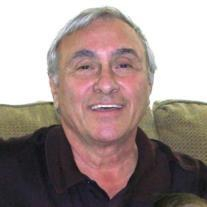 Felix (Phil) Loiacono, age 73, born in Milwaukee, Wisconsin. A lifelong realtor, he died in Dana Point on 9/25/15 after a courageous battle with pancreatic cancer for 5+ years. His positive attitude throughout it all was an inspiration to everyone. His daughter and grandchildren were the light of his life. He touched the lives of many family and friends and will remain in our hearts forever.

A special thanks to the love and support received by his nephew, Justin Loiacono.