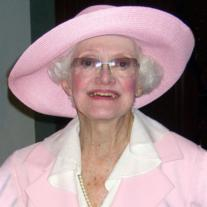 Felicia was raised in New York City and the surrounding areas. After high school, she became a successful fashion model in New York. She then worked for 13 years as an executive assistant to Walter Dorwin Teague, the renowned industrial designer. Felicia married Raymond M. “Buck” Bukaty, a business executive, in 1954. Their daughter, Robin, was born in 1955, and their son, Raymond Jr., was born in 1957. After Buck passed away in 1978, Felicia worked as a travel agent and a public relations consultant.

Felicia will be remembered for her legacy of contributions to civic and cultural life in Orange County, beginning in 1960 when she and her family moved to Fullerton, California. She became an early advocate of special education for special needs children in the Orange County public school system. In 1972, she founded the Fullerton Civic Light Opera Guild and became its first President. Felicia was also a member of the Music Associates of Cal State University, Fullerton.

In 1978, Felicia was one of the founders of the Orange County Performing Arts Center, now known as the Segerstrom Center for the Arts. She also supported the Center as a founding member of the Sonata Chapter of the Center’s Guilds and as an officer of the Center’s support group, Founders Plus.

Felicia was tremendously energetic, optimistic, good-humored and kind, as well as deeply committed to her family and all her charitable and social endeavors. She never missed an opportunity to help a friend in need. She will be dearly missed by all of those who were blessed to have known her.

In lieu of flowers, contributions in Felicia’s memory may be made to The Pacific Symphony, 3631 South Harbor Boulevard, Suite 100, Santa Ana, California 92704.