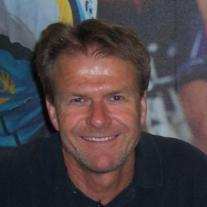 Feico Richard August van der Laan, born April, 28, 1963, passed away on Oct 7, 2011.
Feico will sorely be missed and be remembered as a loving husband, father, son, brother, uncle and friend. Feico lived and attended school in England, Iran, the Netherlands and Belgium and came to the United States in 1979.

Feico was a happy child, surrounded by loving parents and four brothers and one sister. With an inquisitive mind, he built his first radio at the age of eleven, unwittingly developing a taste for
electronics. Feico could swim before he could walk and excelled in local diving competitions. He started playing golf in Iran, field hockey in Belgium and became a great golfer and skier in California.

As an adult he became a recreational pilot and tried his hand at countless activities: scuba diving, bungee jumping and sky diving.

Feico was always the life of the party. He made friends very quickly, not surprising considering his dynamic personality and keen sense of humor,

After obtaining a BS in Electronics Engineering from UC Santa Barbara in 1985, he became a successful and gifted electronics engineer, founding his own company, Laantech.
And, on the side, Feico invented and marketed his own automotive product, known as the V-map.

Feico married his long time girlfriend, Julie Yarbrough, in Laguna Beach, CA in 1999. He was a wonderful step-father to Melissa Jurado and five years later, became a proud father to Evan.

A 529 College Savings Plan has been established for Evan’s education.