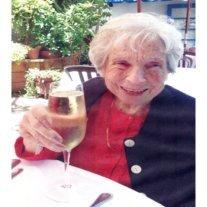 Evelyn graduated from Greenwich High School and worked as the head bookkeeper for Electrolux in Greenwich. After marrying Leonard DeVita, this ‘Greenwich Girl’, moved to Stamford where she raised two daughters, traveled, cooked, read and shopped.

Evelyn served tiramisu long before it appeared on menus. A mystery lover, she loved nothing more than curling-up under her Greenwich Point blanket and reading a good crime caper. She counted Michael Connelly and Robert Parker as two of her favorites.

She urged her daughters to stay-up late to watch Double Indemnity with her. She was a Frank Sinatra Bobby-Soxer and Fan For Life.

A woman on the move, her husband remarked that Petrol was her favorite perfume, she and Leonard traveled the world together, China, India, Japan, Western and Eastern Europe, plus the Caribbean every winter–she was always packed and ready to go. Even in her 90s she’d fly out to DC to visit her nephew, Gary Oliver.

She saw Frank Sinatra at the Paramount, heard Marlon Brando yell ‘Stella’ on Broadway, chatted with Keith Richards on the beach in St Martin and died in her own bed in her own house. May we all be so lucky.

She will be remembered by her California and Connecticut friends as a woman with an adventurous spirit, a strong will, and an inquisitive mind. Think of her whenever you see a sale, take a trip, listen to Sinatra, sip a dry martini or read a good book

A special thank you for their help, care, patience, and endurance to:
Jo Anne Say, Fatima and Neri, Vincent Carapia and family, and Dr Michael Moran.
A BIG thank you to Gary Oliver, nephew extraordinaire,traveling pal, and fellow bon vivant.