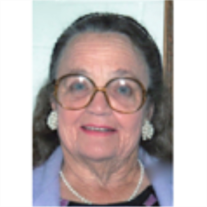 Her viewing and funeral are being held at The Church of Jesus Christ of Latter-day Saints, Shorcliffs building, 470 Camino San Clemente, San Clemente, CA 92672 at 9:00 (Viewing) and (Funeral) 10 a.m. on Saturday, March 4, 2017. Her interment at Pacific View Memorial Park, 3500 Pacific View Drive, Corona Del Mar, California 92635, will follow the funeral at 12 p.m. that day.
Arrangements made by O’Connor Mortuary

Evie was born in Southgate, California on January 10, 1928 to her parents, Martha Savage and Charles Edward Ward. After living in Long Beach until age 5, she grew up in Salt Lake City, Utah. At age 13 she lovingly took care of her nephew, Norman Olson, whom, later in life, she and her husband Dr. L. James Larimore adopted and were seal to in the temple.

Evie was a talented musician and singer. She was a teenage member of the Mormon Tabernacle Choir where she sang 1st Soprano in the chorus and soloed for the choir. As a teenager she performed secretarial work for leaders of the Church of Jesus Christ of Latter-day Saints, which she was a proud member of, and descendant of Mormon Pioneers.

She was a member of and served as a local President of the National Society for Daughters of Utah Pioneers. She moved to San Francisco to study Medicine to become a Registered Nurse. While in San Francisco she also became a Deputy Sheriff and worked in law enforcement. She owned a launderette in San Francisco and when she moved to Grants Pass, Oregon she owned and operated a car dealership and mobile home dealership.

Evelyn became a Nurse for Dr. James Larimore’s practice in Grants Pass. Evie and Jim married and worked side by side until they retired and moved to California in 1981. They both enjoyed attending church at the Shorecliffs LDS church building, with Jim golfing during the week and Evelyn working as a personal secretary to Stake Presidents Donald Sedgwick and Alvin Clawson. She also served as the Laguna Niguel Stake Historian and Librarian for the San Clemente II, now Marblehead Ward.

Evie served as HOA President at Colony Cove and was instrumental in working with the City, State, and Feds in repairing and replacing the bluff on P.C.H. Evie was also a member of the California Federation of Republican Women and a life member of the Republican National Committee.

Just before Jim passed away, he asked Bishop Russell Greiner to take care of Evie for him, and Bishop Greiner responded, “Yes sir, I will.” The Greiner Family adopted Evie to become part of their family and enjoyed her being a grandmother to their children, Cora Rall, Jenny Whitesides, and Rusty Greiner, and mother to Russ and Dianne for the past 28 years. She had resided at Seaview Care Home in San Clemente and received loving care there during her declining health this past year. She will be sorely missed by the Greiner family and never forgotten. Dianne was with her before she passed away to return home to her God and King, Jesus Christ, and her family and friends in the Spirit World.